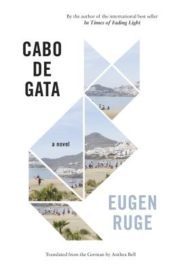 Failing to connect with others, traveling aimlessly, giving oneself over to change, being lost in translation, even to oneself—these themes sway together like dust in a ray of sunlight in German novelist Eugen Ruge’s second book. His story brings to mind the poem “Degrees of Gray in Philipsburg” by Richard Hugo:

You might come here Sunday on a whim.
Say your life broke down. The last good kiss
you had was years ago. You walk these streets
laid out by the insane, past hotels
that didn’t last, bars that did, the tortured try
of local drivers to accelerate their lives.

While Hugo’s writing is set in desolate towns of Montana and Ruge’s in Berlin and the small island of Cabo de Gata, an Andalusian fishing village in the south-eastern corner of Spain, they emit the same emotional echo: An anti-romantic yet magnetic insistence that this could happen to anyone, anywhere, and it probably will.

Ruge’s unnamed narrator is a writer with little holding him to his home in Berlin: his distant relationship with his father, an ex-girlfriend and her daughter, occasional work doing radio features since quitting his serious work at the Institute for Chemical Engineering one year before. He describes his life in sickening detail: “I would have a cold shower, I would go back into the kitchen, still brushing my teeth, to turn down the gas when the coffee foamed up for the first time; I would stir my muesli—four kinds of cereal flakes with apple and banana—would make my way to my desk balancing the coffeepot in my left hand.” As autumn wears down to winter he decides to leave Berlin and write his novel. With the wry humor (evident throughout) he states, “I don’t recollect in detail to whom I gave notice about what; I just gave notice to everyone and everything.”

He heads south, seeking the warmest part of Spain, hoping it will soothe his self-identified “pedantic and compulsive, reserved and secretive” personality. As he walks the beach and the promenades and writes at cafes, letting his greedy mind wander and cling to the passing lives of others, his experience is meditative and rhythmic, as is Ruge’s writing. The story appears, cast in blues and grays, images smeary, then cut. Not knowing Spanish, he’s isolated and those he meets are opaque characters, “the Englishman,” “the American.” His most involved relationship is his last, with a stray cat.

One third of the way into the book we learn that our narrator is typing this story fifteen years later on a flight from Minneapolis to Tokyo. We wonder what happened, what causes him to reflect on this period of time. We are given no easy answers. He says simply that Cabo de Gata is what “I would call the place where I spent one hundred and twenty-three days trying to write a novel.” It’s his story, with its highs and lows, loose as the sea, that he refuses to conclude, and that continues on somewhere in the distance, “like something washed up by the sea. And like something that sooner or later would be washed away again.”