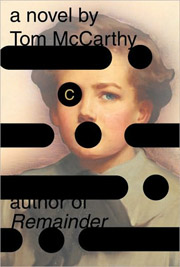 An ambitious bildungsroman that made it to the Man Booker Prize shortlist, Tom McCarthy’s C follows our hero Serge Carrefax from his birth in late 19th-century England to his occult shipboard death in the 1920s. The saga in between gives the author an opportunity to sing some very familiar songs about modern science, art, and the souls of our own 21st-century folk.

Serge is born to an eccentric country family, one dominated by his overbearing, brilliant scientist sister and his unbrilliant but still overbearing inventor father. The latter is director of a school for the deaf, an oralist who insists not just on teaching speech to his students, but on stifling sign language: “Speech . . . must be wrung from him, wrenched out.” He applies this principle to his own wife, a deaf woman who discreetly signs with the gardener. In his off hours, he’s obsessed with telegraphy and the shopworn possibility of electronic communication with the dead.

Serge’s sister is a wild child with a microscope, first seen tormenting her baby brother by using his penis as a telegraph key, cementing his incestuous loyalty. Her interests fall more to natural science and chemistry: she has a lab, draws cross-sections, and generally fits into the Arcadia mold of budding young genius.

All this eccentricity crowds Serge mostly out of the picture. He is a slight presence who finds refuge in late-night listening sessions on his wireless set, chatting with and eavesdropping on radio bugs, ocean liners, and transmissions from the far corners of the Empire. McCarthy’s evocation of the Marconi-era radio world is compelling: a pre-verbal soup of Morse code, where a young boy with a spark set can find himself on equal footing with the Royal Navy.

The opening section allows McCarthy to expound on the contradictions and erosions of modern science—how certainty can breed cruelty, how the drive to communicate can be a flight from intimacy, how enlightenment can devolve into forbidden lore. This comes to a head when his sister commits suicide after an insectile premonition of the Great War:

The next section finds Serge in a Continental spa, trying to purge his mela chole with healing water and the pursuit of a hunchbacked masseuse. Stripped of his family and his spark-set, Serge himself turns out to have little in the way of personality, carrying only a dark, bloody, fecal sorrow that’s transmuted in each successive phase of his life: it manifests as a love of drugs and the impersonal lethality of air combat, a fondness for memorial architecture, visits to Spiritualist seances. He finally completes his circuit in Egypt as an archeologist-spy, rummaging through the trash-filled tombs of the Old Kingdom.

Throughout the book, Serge remains blank, a cipher to follow through instructive adventures to his final fate. McCarthy is more interested in communicating his own notions about modernity than he is in satisfying either traditional novelistic goals of plot and character or formal ambitions in prose or structure. Instead, he depends on recognition and repetition to drive the book forward.

The effect is a lot like fan fiction, where fans of Harry Potter or Star Trek write their favorite characters into new storylines. McCarthy’s source material comes from Pynchon, Byatt, Stoppard, Durell, Heller, and others: A baby’s penis is conditioned to detect invisible forces. A perfidious godfather drops in from the Foreign Service to teach the children cryptography. The compassionate tutor happens to be an articulate Marxist. Instead of allowing the novelty and terror of flying combat to create their own reality, McCarthy drags an artist in to explain how the aerial view disrupts the picture plane and spawns abstraction:

“It doesn’t work,” he moans as Serge pours him a glass. “It’s just not possible once you’re in flight.”
“What’s not?” Serge asks.
“Art! Tell me, Counterfax: what’s the first rule of landscape painting? . . . Horizon!” Carlisile slaps the table. “Got to have a damn horizon if you’re going to paint a landscape! And what’s the first thing to disappear when some madman at your back is loopy-looping?”

McCarthy is a skillful enough writer to knit these ideas into a fluent narrative, but not searching enough to let the process lead him somewhere new. By remaining doggedly committed to the conceptual elements of the book, he allows the form to become a kind of pun, only there to convey an idea and without any sort of generative power of its own. All those punch-card looms and postmodern Egyptian ruins end up feeling anachronistic, too heavy with foreshadowing.

Compelling novels sustain their tensions, closing one story while leaving subtexts unfulfilled. As Catullus said, it’s a poet’s job to incite an itch, and give erections to impotent old men. Fan fiction allows a reader to scratch those itches, making subtext explicit. But in finishing what others have started, McCarthy leaves one feeling a bit deflated.