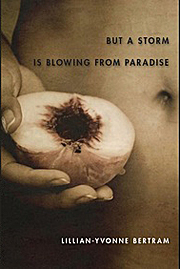 Lillian-Yvonne Bertram’s But a Storm is Blowing from Paradise locates the human in a large context, vacillating between the cosmic and common. Bertram writes of loneliness and the violence and wonder of our existence—while acknowledging the greater mystery of the unknown. This first book of poetry and prose poems from Betram, whose work has appeared in Black Warrior Review, Callaloo, Gulf Coast, Harvard Review and elsewhere, recognizes the frailty of humans, and the minuteness of our impact on the universe. In “The Body Deformed by Tidal Forces,” she writes:

O thuggish awakening.
All planets but this one were named after gods.

Throughout the collection, Bertram draws on natural, planetary, and bodily images. These lend a sense of scope that places homo sapiens in an abundantly beautiful and vast existence. By book’s end, Bertram assembles a constellation of poetry that will leave readers grateful to have undertaken this “extragalactic” adventure.

Throughout the collection, open spaces (“a bismuth yellow field / of chuckle-colored barns,” an “angel-less fog,” ghost towns) invite meditations on loneliness. In “Medicine Lake,” a solitary narrator practices pretending that an absent loved one still roams the halls of their home. The loved one’s “mass” manifests in lines of prose considering mass and matter:

Like “Medicine Lake,” many of Bertram’s poems demonstrate the development of language and thought as they move closer to the concrete before drifting into the “debris.” We move closer to an understanding of the size of the human heart, only to have that heart cast against the immensity of astrological exploration. The lineage of a father’s children holds the weight of tradition, of ownership, pride, even the physical weight of his children. But what do these weigh against a galaxy (let alone a universe) so vast and so dense that our world might be overlooked, as a footprint in desert sand?

Death plays a pivotal role in But a Storm is Blowing from Paradise. Bertram secularizes and satirizes common notions of death in an effort to demystify. In poems such as “Moon Illusion Eclogue,” the author calls readers’ attention to the cognitive dissonance between human death and decay:

She seeks not to condemn nostalgia, but to suggest that death’s foreboding clouds our view of the world around us. The uncertainty of death produces a hallucinogenic effect. We reconcile this dissonance, Bertram suggests, by conjuring an increasingly forgiving life/world view as we approach our deaths.

Bertram’s preoccupation with the body and her secular treatment of death palpitates in “The Science of the Heart,” a poem in which the speaker receives the heart of a deceased loved one from a lab technician:

not-red. Not pulsing and warm. But grayish brown
with yellowed clumps, yellow like ordinary chicken fat

when the heart, or any other organ,
is removed from the body—it lives a mayfly life.
Blood blooms out of the organ into flight,
and it dies. It takes a few hours but it dies.

Hold each half in hand as a common coconut.

Rhythm of your own choosing.

Bertram’s poems entreat readers to partake of the human body. She offers it bisected, divorced from the emotional contexts in which poets often render the heart. We see the heart as a “blackening egg,” fish hearts, a heart devoid of blood, and a heart that smells of clay.

Bertram’s subjection of the body to the visceral decay of the natural world gives way to its placement among the stars, beyond what the mind can fathom. Bodies die throughout Paradise. More accurately, the bodies pass through. They return from the dust into new lives. The speaker of “In Leaving My Lover Teaches Me Half A Bible Story” imagines that in time, a deer carcass buoyed by a flock of wasps over a creek “will want to rise and see what kind of day it is.” Sure enough, in “Golding In The Dark With Old Man Heart,” the hart returns: “[We] Hear dirts of the prairie fly from us / like so much quantum dust whisking in the eyes of deer.” Dust” appears in many of the poems in this collection; the dust that insects, humans, buildings, civilizations return to represents humans’ simultaneously miniscule and permeating presence in the universe.

In Paradise, life’s transience gives way to opportunities for Bertram to experiment successfully with personification and anthropomorphization. The speaker in “I Was A Barking Dog” intimates that:

I was a thing once. A coyote
routing the timber
at the river’s edge.

Then, the river’s edge.

January’s frigid waistcoat
slinging my belly
low over the fields.

The fields?
Barked with ice.

Moments like these, in which the narrator speaks with surety about alternate/ previous/ future existences, invite the reader along for the pleasurable journey of doing the same. The choice to employ the first-person singular throughout the work (though not its entirety) gives the reader license to transform, as fluidly as the speaker, from human to predator, from predator to riverbank. Similarly, “I Am Trying As Hard As A Human,” which features a sow-steering cowgirl as narrator, asks of the reader:

My friend, do you
not ever wish instead
to be a cat
the killing kind of cat
making off
with other children’s swiftless pets clinched deftly
in our jaws?

Though surreal in scope, these poems treat visceral and human inclinations: to draw closer to nature, to capture, to prey, to hold in our palms (or our jaws) another life, even our own, and understand it.

The brief moments when Betram’s understanding of the world manifest in direct critiques—of American consumer culture and organized religion—distract from Paradise with incongruously preachy undertones. Take “{H0},” for example:

Forward America, forward with as many grapes
in your mouth as you can
with your
rollerskates                    cornfields
redshifting into the future

This caricature of American mainstream culture deviates from the collection’s other poems, which invite the reader to consider alternative world/galaxy views and lifestyles—without indicting others. Like “{H0},” “Behind the Christian Door” distracts from the collection’s focus, this time with dizzying repetition. Spiraling like a revolving door, the poem repeats a singular phrase continually over the course of its twenty-nine lines and in doing so, recreates the sentence along the right side of the page:

These missteps distract, but ultimately do little to tarnish this engaging first book of poetry. Lillian-Yvonne Bertram crafts for her readers an interactive exercise in existentialism, replete with meditations, both grand and minute, on what it means to exist. Her preoccupation with the human body refreshes, in her willingness to subject the body to the consumption of the cosmos, to leave the body behind for a journey into the vast whirl of dust that forms her universe, to leap from atom to animal. By book’s end, savvy readers will comprehend Bertram’s choice of title, taken from Walter Benjamin’s essay “Theses on the Philosophy of History”:

But a storm is blowing from Paradise; it has got caught in his wings with such violence that the angel can no longer close them. The storm irresistibly propels him into the future to which his back is turned, while the pile of debris before him grows skyward. This storm is what we call progress.