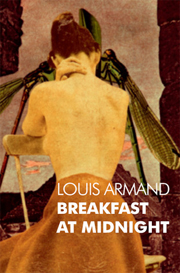 Louis Armand’s Breakfast at Midnight crackles across the page like a cloaked drummer keeping time on a hi-hat cymbal in some broken down, forgotten nightclub on the wrong side of the tracks. A darkly radiant ode to the underbelly of Prague, the novel is a pinball fever dream, sopping with sweat, booze, and sex, that bathes its confines in an unsettling atmosphere of grime while breathing unexpected life into the modern noir.

Armand’s Prague is rechristened Kafkaville, a rainy nest where the air smells sour and the buildings are little more than rubble. Trapped in a decade long tragedy that has left him existing in the shadows, a nameless fugitive communicates with lost souls through ritualistic means and buoys his quest to find a vanished love with alcohol and mind-altering drugs—the latter mostly provided by his lone friend, a pornographer named Blake. But things take a turn when a dead girl washes ashore. Staring at her carved body in the morgue, Armand’s protagonist spirals:

Regen’s lying there, watching me. Red hair and jade eyes like an oriental fetish. A blur of stage-light on porcelain. Too naked. And then she’s gone again. Where she lay, there’s a corpse. Like a Janus figure. They might’ve been twins, but not quite. Two images reflecting one another through a gap in time.

A cryptic mystery follows, one that unfurls in a staccato, gumshoe voice, as our corrupt hero stumbles into the day, imbibing and cavorting with strangers and wondering if there’s a connection between this dead girl and his lost companion. His stream-of-consciousness meanderings—at one point confessing, “Sometimes I have trouble remembering things the way they happen. Or else I remember too well and reality palls”—splinter his narrative timeline into shards where past and present comingle, where reality blurs (“Sometimes I wonder if Blake really exists, or if I really exist, or if we made each other up as alibis”), and where answers exist as opaque, slippery creatures. And though several mainstays of the noir genre—the tortured anti-hero, a death or two, revenge, a conniving confidant—find their way into the novel, the typical thriller template gets dropped into a blender. The result is an intoxicating narrative as much about reliving past grief as it is about the truth of life.

While the residents of Kafkaville would find solace with those creations of the master writer to which their city’s name pays tribute—whether it’s the shared quality of isolationism, the brutality of family, or the existential tangents—it isn’t hard to find comparisons for these men and women in the characters of the great Jim Thompson as well. Thompson’s prose was similarly stuffed with alcoholic haze and bouts of violent insanity and nihilism, the kind of stories that make the reader want to take a shower after reading. With Breakfast at Midnight, Armand has matched Thompson blow-for-blow, crafting a faultless, convincingly hard-boiled world that welcomes the downtrodden, the depraved, and the damaged—not to mention those casual visitors who watch it all fall down from beyond the page.