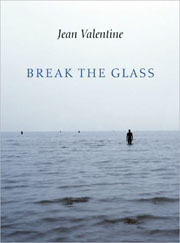 Jean Valentine is a quietly astonishing poet whose reputation precedes her. Her poetry has undergone changes since its debut in 1965, of course, but is equally marked by the continuity of its concerns and a distinct, clipped, semi-opacity. As Wallace Stevens famously said: “The poem must resist the intelligence / Almost successfully.” Valentine’s do just that, and the rewards for assiduous engagement are many.

Arranged in four sections, these new poems are as delicate as lace, and as strong, despite their often irregular patterns and open spaces. Their materiality, their language, has been compressed, pared down, reduced to the absolute essence. Stitched together (Valentine uses the image of “needle and thread” more than once), they are the means by which she goes about translating, as she puts it, the unconscious, the unseen, the immaterial. Dreams often give rise to or inhabit her poems, which accounts in part for their shifting, rational/irrational quality (and for the occasional “blue man”).

Some of this is clear in “Even all night long”:

Even all night long while
the night train

pulls me on in my dream
like a needle

Even then, down in my bed
my hand across the sheet

are held
and kissed

the water
the child

“Dreams are the messengers of God,” Valentine has said. This dream is both particular and universal, “my hand” and “my face” being joined with “anyone’s hand” and “anyone’s face” as the compound subject of “are held and kissed.” Loss (due to death, abandonment, disappearance, separation), a perennial subject of hers, is here undone, at least temporarily.

Many of these lean poems also gain strength via referentiality, as Valentine deftly alters received stories. In “Then Abraham,” when Isaac and his father return from the former’s near-sacrifice, they are accompanied by an “other like a Vermeer girl.” Similarly, “Eurydice who guides” has Orpheus’ beloved on the same level as him. (That myth is a great tale of loss.) These ancient stories are not only living, but mutable; that makes them extra useful.

“As with rosy steps the morn,” one of several elegies, takes on tremendous power through familiarity with the aria from the Handel oratorio (“Theodora”). The poet says it’s not the words, but the notes, “the whole air, / no edge, no center, // And the light so thin, so fast—.” Valentine often invokes music for its ineffability, conveying deep meaning without words. “Break the glass . . . Open / the music behind the glass.” Her stripped-down poems, with their gaps and leaps, are another attempt to remedy words’ inadequacies.

Visual art is likewise summoned. “He Disappeared into Complete Silence” will successfully resist the intelligence unless one knows the specific engraving in Louise Bourgeois’ book of that name. Similarly, acquaintance with Martín Ramirez’s work dispels the puzzlement of “Outsider Art,” expanding and deepening that poem. “My Work of Art” describes the poet’s own collage, “a piece of brown wrapping paper / taped to the wall,” consisting of words, a stamp, and a catalpa leaf.

“Lucy,” a sequence on the 3.2-million-year-old hominid skeleton previously published as a chapbook, comprises the book’s final section. Valentine manages, almost miraculously, to cross the vast reaches of space and time so as to speak directly with our ancient ancestor, and to claim a meaningful and rich relationship. Lucy is addressed in numerous ways: “my saxifrage that splits the rocks,” (W. C. Williams) “wildgood / mother,” “the ferryman,” “bodhisattva here- / with-us,” “Skeleton Woman,” “Guardian, Death Woman.” She is the feminine, maternal avatar, an omniscient, salvific, wisdom figure through whom the “I” of the poems finds comfort, reassurance, blessing, and, ultimately, union with all that has been lost.

“Any poet now has to try to talk about the unseen,” said Mahmoud Darwish. Valentine has acknowledged: “I am going towards the spiritual rather than away from it.” She hears intimations of the divine. There is another world, a world inside (or beyond) this world, and Valentine means to gain access. In “Canoe” the poet speaks of “A map / to the end of this world or cycle.” From “Red cloth”:

What is most striking of all the remarkable qualities in these poems is Valentine’s attention to mystery, to the metaphysical. Yes, there is division and dislocation, but one can strive for and achieve connection. The membrane between worlds, between life and death, is permeable. There is a ferry or a ferryman to bring us across to a new life. Or this, from “Ghost Elephants”:

At first the goodbye had a lilt to it—
maybe just a couple of months—
but it was a beheading.

Ghost elephant,
reach down,
cross me over—

In “I am fain a page in the court of space,” Valentine says:

It will harden when I take it off,
my skin, when I
leave you on the ground and walk away.

The third person unexpectedly shifts to second, as the “I” speaks of her sloughed-off skin, an old life left behind.

However battered and broken we may be, these poems tell us in their various, almost inscrutable, ways, that meaning is attainable. This line, “from the West down to the East,” appears out of its original context. When we, almost reflexively, embed it in Bob Dylan’s “I see my light come shining . . . Any day now, any day now / I shall be released,” we realize its potency. “Diana” ends: “Do we get another life? Oh yes. / Maybe not in this place. Maybe in different forms.” Thus the tone of the book as a whole, without pretending to have resolved the complexity or the mystery, is hopeful. This is Valentine’s gift to us.