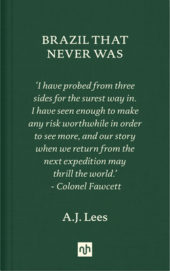 Published in a small, almost pocket-sized format, A. J. Lees’s Brazil That Never Was is itself a kind of illusional publication. Although the cloth-bound book is only 139 pages in length—and that with photographs, chapter breaks, and heavy leading between lines—it took weeks to read, despite being mesmerizing from its first chapter. I’ve never taken quite so long to devour a work that totally interested me.

Moreover, though apparently based on facts, the plot of the book feels fantastical: a successful British neurologist becomes so incredibly involved in a childhood fantasy about a country far away that he simply had to take a voyage into the Amazon. Certainly, Lees would not be the first “mad” Englishman to be enticed into the vast Amazonian wilderness. Evelyn Waugh’s desperate attempt to reach Manaus in the Brazilian interior became the basis of his 1934 novel A Handful of Dust, and you might fill several shelves with books and films about European men’s failed journeys or their dreams of travel into seemingly enchanted forests. These dreams are, of course, folly, as most Brazilians knew the Amazon to be a fallen paradise due to the rubber barons who destroyed numerous acres and tribes in the South American equivalent of Conrad’s “heart of darkness.”

Lees’s fascination began innocently enough when his schoolteacher father presented him with a dog-eared copy of Exploration Fawcett, a popular 1953 work that told of Colonel Percy Fawcett’s several voyages into the Amazonian forests throughout the 1910s and ’20s, ending in his 1925 search for a lost city from which he never returned. Surrounded by the steaming smokestacks of vast cargo ships in the Liverpool harbor, the young Lees created an imaginative alternative to the drab landscape in which he lived:

Each Saturday we left the smoking works and foundries and escaped into the dank shadows of Liverpool. . . . The SS Hilary was not the only steamer destined for Brazil. The SS Raphael was leaving on the evening tide with a cargo of pianos for Santos, and the SS Herdsman was bound for the chocolate port of Salvador Bahia. Cotton bales arrived on red duster ships from São Paulo, and sacks of Pernambuco molasses were unloaded at Huskisson Dock. As we waited, separated from the shops by the towering dock wall, unfamiliar scents of Brazil drifted in on the tide streams of the North Atlantic.

Returning to this childhood favorite as an adult, Lees began to perceive that it was actually written by Fawcett’s son Brian, and slowly, through amazing coincidences and contact with others who had followed the Fawcett legend over the years, he gradually pieced together a tale that is far more fabulous than the actual events surrounding Fawcett’s search. Indeed, the third illusion of Brazil That Never Was is that it concerns a journey to the Brazilian heartland, when in truth the story Lees tells comes straight out of dusty British libraries, crumbling letters, and stories and gossip by family members, students of the occult, and science fiction writers.

Thus, this book’s journey to the jungle of Amazonia occurs more through research rather than by any canoe down a river. But what Lees finds during his “travels” is that in Fawcett lies a darkness of mind every bit as mad as that of Conrad’s Kurtz. Fawcett’s search for his “Lost City” likely ended his own life and killed his “magically gifted” son Jack and his friend. Even Lees’s rendition of the backstory about Jack involves Asian religious beliefs spiced-up with theosophist ramblings, hack psychology, and dreamy semi-scientific pipedreams.

In short, Fawcett’s falsely reported scientific expeditions into Brazil had more links to racist fantasies of faith like L. Ron Hubbard’s founding stories of Scientology than to any rational search for prehistoric civilizations. What to most people seemed like one of the last great adventures into the unknown wilds was actually an extraordinarily farcical voyage into insanity. To his credit, Lees does not judge these crackpot concepts so much as he thoroughly explores the various absurd avenues through which the Fawcett writings, correspondence, and histories lead. Even after he recognizes that Fawcett’s explorations (and what his own childhood imagination imbued those adventures with) were little more than nonsense, he is still determined to find proof by actually traveling to Manaus, the starting point into the jungle, to see for himself. What he discovers is far more mundane than the fantasies of Fawcett: Manaus smells of a “nauseous stench of diesel” and is actually an urban landscape consisting of “a Shell garage, rows of shops with roller shutters defending their windows, overhead bridges, corrugated iron shacks, sallow walls covered in graffiti, bracketed streetlights, telephone wires, parking lots filled with trucks, and a Coca Cola bottling plant.” He concludes ruefully “that what I had seen with my own eyes could never compete with the flashbacks of my dead past.”

The several layers of illusion in Lees’s book seem to reflect the Liverpool lad’s own journey through illusion while delving into his childhood dream. Only when he travels on a silkwood dugout down the Rio Negro does he briefly find himself in a world where “time had collapsed.” Clearly this, however, is not a world in which he can exist, and when he returns to society, he realizes that “trying to recapture those magic moments [of his childhood vision] was as impractical as trying to look for the path of the SS Hilary in the ocean.” A ship leaves no track, just as Fawcett’s mad march into the interior left no evidence of his even having entered it. Yet in Brazil That Never Was, something does persist: the human yearning for discovery.