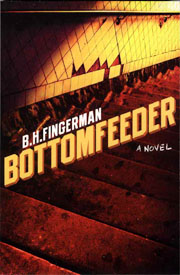 We're all familiar with the legions of sexy, forever-young, brooding vampires that have dominated vampire fiction from Bram Stoker to Buffy the Vampire Slayer. Well, being immortal loses some of its appeal when you've got to spend eternity working in a cubicle and dining on the dregs of humanity. B. H. Fingerman—better known as Bob Fingerman, the disturbingly, delightfully dead-on comics artist behind the acclaimed chronicles of hipster New York, Minimum Wage and Beg the Question—here explores what happens when the undead are unglamorous, and the results are morbid and droll.

Phil Merman is a reluctant vampire, so guilt-ridden over his need to feast on human blood that he limits his diet to vagrants and criminals in the hope that he'll minimize his impact on society. He lives in a drab Brooklyn apartment, works a tedious job cataloging news photos (the graveyard shift, natch), and rues the day he became a creature of the night. Initially, he tried to hide his vampirism, but his marriage fell apart soon after he was turned in 1974, and his parents grew suspicious of his agelessness before their deaths; his only friend, and his sole remaining connection to his old life, is a swishy, pathetic drunkard named Shelley who makes the occasional inebriated pass at Phil in between sordid stories of his (likely imaginary) girlfriends.

Things change when Phil makes a new friend in Eddie, a fellow vampire he meets while on the hunt. As Eddie begins to introduce him to others of their kind, Phil begins to question his solitary life and embrace his identity as a bloodsucker. He enters a new underworld of vampires from all walks of life—the rich and decadent as well as relative good Samaritans. Realizing that his distaste for the depravity which comes with being undead is a bit of hypocritical reverse-snobbery, not to mention self-loathing, he begins to let loose and, for want of a better word, live.

Fingerman does a fantastic job fleshing out the details of Phil's life through a first-person narrative filled with self-deprecation, endearingly peppered with groan-worthy Catskills-comedian one-liners, and entirely blasé throughout about the gore. And gore there is—the accounts of feedings, coming as they do in such an ordinary voice, often have a stomach-twisting power sometimes muted in more gothic depictions of the macabre.

The story is compelling and Phil is an endearing character. In fact, he's such a sad sack, the reader may find herself wishing he would just go out, enjoy a nice meal, and stop beating himself up about it, already. Unfortunately, the mystery itself falls a bit flat (as does the Catskills schtick at times) when Phil's somewhat unsurprising sire is revealed, but no matter— Fingerman rescues the ending and manages to wrap things up with gruesome panache. Ultimately, Bottomfeeder is a tasty morsel and a welcome antidote to the velvet-draped world of predictable vampire fiction.