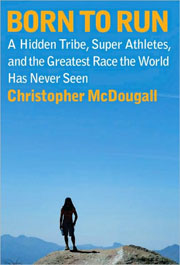 The spur that starts Christopher McDougall’s Born to Run in motion is a pain that appears in his foot when he runs. McDougall’s search for a remedy leads him to the Tarahumara Indians of the Copper Canyon in Mexico, a legendary tribe whose members, even its elderly members, participate in ridiculously long races without suffering injury. In the course of his journeys, McDougall meets a number of interesting real-life characters, including the mysterious Caballo Blanco, an expat living with the Tarahumara, who introduces McDougall to the tribe. The narrative arc of the book involves McDougall and the “White Horse” organizing a race between select U.S. ultramarathoners and the Tarahumara. Alongside the narrative, McDougall presents startling evidence and reaches extraordinary conclusions about how much of our common sense about running is wrong.

Unfortunately, McDougall tries too hard to prove that the Tarahumara’s way of life is in all aspects better than the Western way. There’s an extra-textual reason that may vindicate him—the Tarahumara’s land is being encroached upon by roads built by the Mexican government in complicit assistance of drug cartels that McDougall and Caballo Blanco wish to thwart by calling positive attention to the Tarahumara—but the book suffers for it. McDougall forgoes his claims of objectivity when he moves from extolling Tarahumara-style running to pleading for Tarahumara-style living, saying that if we learn to live like the Tarahumara, not only will we enjoy running, be injury-free, and eliminate obesity, but we will also eliminate depression, heart disease, cancer, and crime. These hyperbolic claims risk undermining the real virtues of his book.

And these virtues are substantial. Too many running books encourage readers to awe over accomplished runners and only promote running insofar as the accomplished runners’ stories are inspirational. Born to Run does something different. It actively promotes running by underscoring its universality in two distinct but related ways. First of all, McDougall makes the joy of running palpable. The emphasis in his writing is not on training schedules or impressive times. Even when he’s writing about some of the best ultra-runners in the world, his focus remains on the intense and often rapturous subjective experiences running cultivates:

I got a shock of my own when I hit the river. I’d been concentrating so much on watching my footing in the dark and reviewing my mental checklist (bend those knees . . . bird steps . . . leave no trace) that when I started to wade through the knee-deep water, it suddenly hit me: I’d just run two miles and it felt like nothing. Better than nothing—I felt light and loose, even more springy and energized than I had before the start.

The second really brilliant thing about McDougall’s book is more complicated. One of the lessons that McDougall learns from the Tarahumara is that anyone can run long distances. The big picture story is this: Far back in our evolutionary past, one of the key attributes that allowed our species to excel was our ability to run; we evolved because we could run, and therefore we evolved to run. It follows that the average person should still be able to run long distances. The fact that the average person cannot do so without incurring injury forces us to ask why.

And so McDougall’s driving question: What makes the Tarahumara different? The answer is that the way the Tarahumara run is quite different from the way most Westerners run. The Tarahumara avoid injury because they’ve managed to stick to running the way humans evolved to run, and they’ve done this mostly by remaining low-tech. There’s a frightening correlation between the development of expensive, air-cushioning, arch-supporting shoes and running injuries. Born to Run is at its best when McDougall is investigating these sorts of concerns; McDougall writes these sections well and makes a rock-solid case for running as close as possible to how our ancestors ran.

The argument for running closer to our natural state is finding traction among runners. It’s an argument that will find sympathetic ears in Michael Pollan’s readership and other groups who see that who we’ve been has relevance for who are, and the longer we’ve lived a certain way the wiser we would be to trust there’s a reason for it.