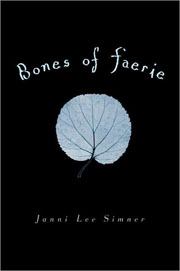 Janni Lee Simmer’s debut young adult novel gives us the story of Liza, a fifteen-year-old girl forced to navigate through the wreckage of a post-apocalyptic world—and through the broken remains of her basic assumptions about this world, and how it works.

Liza has grown up in the aftermath of a devastating, and magical, war. She knows to avoid glowing stones, as deadly and indiscriminate as the merely mechanical explosives in a minefield. She knows that mockingbirds still mimic car alarms because her elders told her so, though Liza has never heard a car alarm, or seen a moving car. She understands plants to be both aware and malevolent. The trees surrounding her village can devour people, and frequently try. Cornfields do not enjoy being harvested, and resist in any way they can. Most plants have thorns, now, and all of them are angry.

Liza’s world is artfully presented by Simner, who draws us far enough into her protagonist’s point of view that we accept Liza’s sense of what is familiar and ordinary—as when a butterfly bursts into flame, just like they usually do. We also understand and accept what Liza knows about magic, or thinks that she knows: that all magic is as deadly as unexploded ordinance, half-buried in the ground, and that it must be destroyed whenever possible. This is brutally demonstrated by Liza's father in the very first pages of the novel; when Liza's little sister is born with glass-clear hair, faerie-marked, the child doesn't live through her first hour. “Cast out the magic born among you.” Liza believes in this harsh necessity, and considers her father “ a sensible man,” so it throws her into an emotionally nuanced and believable crisis when she starts to exhibit uncanny abilities of her own.

This crisis is similar to the one faced by Chris, the teen protagonist of M.T. Anderson's Thirsty, who lives in a world where vampires exist—and are summarily lynched once discovered. Chris realizes that he is becoming a vampire himself, and that there is pretty much nothing he can do about it. Both the vampiric and magical transformations are excellent metaphors for adolescence in general, with all of its unstoppable changes and shame-soaked taboos, but these are richer stories than a merely allegorical reading would suggest. Liza's struggle is not simply to accept herself as someone new and different. She must confront her most basic assumptions about the rules that have, until now, fully governed her understanding of the world. This is an extremely difficult task for anyone to face, and the slow shifts in Liza's perspective are painfully and beautifully drawn.

Meanwhile, Liza also has to contend with a missing mother, the sobbing ghost of a dead sister, a friend who sometimes turns into a wolf, a forest of trees intent on devouring her, and myriad other difficulties. All of this makes for a grand adventure, but it is Liza's struggle with her own prejudices that forms the core of this moving novel.