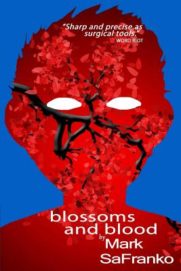 The title of Mark SaFranko’s new installment of his fictional alter-ego Max Zajack’s biography comes from a snippet of Norwegian author Knut Hamsun’s Victoria: “all love’s ways are strewn with blossoms and blood.” SaFranko’s style is a distillation of that founded by Hamsun in the late nineteenth century and refined further, in America, through Nathanael West, Charles Bukowski, John Fante, and others—a style of individualized assertion coupled with an atavistic divination of the modern world.

Blossoms and Blood may be considered a prequel to SaFranko’s Hating Olivia (Harper Perennial, 2010), which detailed the adult Max’s torrid affair with its tempestuous title character. It displays a reverence in recounting the facts of the author’s early life in fictional form comparable to that of Charles Bukowski in Ham On Rye—a crucial difference being that while Hank Chinaski’s parents were, by turns, abusive or complicit in the author’s abuse by the world at large, Max Zajack‘s parents Bash and Jake are ecumenical in their accepting stance, simultaneously enabling yet delimiting his outlook with their cynicism:

The atmosphere at 810 Iowa had always been oppressive, but it had gotten even heavier. Whenever I could figure out how to escape, Frankie and I ran the streets. In fact, Bash and Jake took to calling me “the Runner”—among other things. . . . Bash always bitched about me and Jake warned me of the dangers of turning into a hoodlum, but they couldn’t force me to stay indoors all the time.

A “weird old bugger” named Knight “who wore a ski-cap and a flea-bitten winter coat even in the dog days of August” lives in Max’s neighborhood. Peering through this old man’s window one day, our kid comes face to face with a rat, and when Knight is found dead in his house later, Max imagines rats eating the corpse. The rats don’t keep him from returning for a clutch of flowers he spotted in the backyard, though, as they are perfect for giving to the girl he loves. Indeed, Young Zajack’s captivation by his classmate Astrid Perry, the “ice queen” with “cornflower blue eyes,” is this book’s engine. “Suddenly every single thing about her cut me like a wild razor,” he says; “. . . I couldn’t stop looking at her. Even her pink fingernails were painfully beautiful. Her school jumper was the luckiest thing in the world—it got to cling to her body.”

Max must reconcile these exciting new feelings with the dogmatic conditioning he’s simultaneously receiving from his Catholic education, the good-natured hard-heartedness of the tough guys he runs with, and the general stoicism of the house he lives in with his cynical parents, where things like love are never mentioned. As a result, Max’s mental arithmetic is essential, as opposed to mathematical, resulting in his heartfelt, inchoate vows made in passing Astrid’s residence becoming the stepping stones to his greater familiarity with the laws of reality:

Would I be invited into that house one day? Yes. No doubt about it. God would see to it. I’d prayed to Him, and He would answer my prayers.
I turned for home, full of confidence.
But nothing happened. Nothing whatsoever changed. . . . how could a person tell the difference between God’s indifference or his nonexistence? It seemed strange, even embarrassing and humiliating, to beg for someone’s attention anyway, but I couldn’t figure out an alternative.

In passages like this, treating existential considerations with nuts and bolts phrasing, SaFranko’s book displays great reverence for language without seeming self-aware, exemplifying that beautiful miracle of difficult simplicity too infrequently practiced these days. Notably, where others might recount their childhoods from an ostensibly wiser adult perspective, this child-protagonist stands on the verge of having made any such writerly decisions, being as yet concerned only with elemental basics such as competing for Astrid’s affection with other young hoods in his unnamed northeastern city:

His face was a blank, neither happy or sad. Having Astrid Perry fall for him apparently meant nothing to him, or next to nothing. Maybe he was a half-wit, a moron. Didn’t Astrid realize that Mike Vesuvius was nothing but a cipher, and that there was something singular about Max Zajack? Didn’t she see the rare mark of the genius on my forehead? I knew it was there. How could she have missed it?

Taking one’s life as the model for one’s literary art seems to be a dying art in American lit. SaFranko’s adherence to this venerable tradition has redirected him, in recent years, to the European market’s archivists of that Old Style Greatness—in this case, publication by the United Kingdom’s Murder Slim Press. Consequently, his work has received lesser exposure stateside, despite the fact that the New Jersey author got his start via an encomium from John Fante’s son Dan Fante (as detailed in the P.S. section of Hating Olivia). One can only hope that more of his fellow citizens come around to joining Europeans in thinking highly of this very talented writer.