Black and Blur
consent not to be a single being
Fred Moten
Duke University Press ($27.95)

In a recent interview in The Brooklyn Rail, poet Fred Moten says this when describing the “blur” resisting “individuation” of an artwork: “Everything is going on. There is an enigmatic line I always wondered about that Coltrane has in the poem that he wrote to accompany the third part of A Love Supreme, something like, It all has to do with it.” Moten also recalls

reading this great essay by Baraka called “The Myth of a Negro Literature” where he’s actually saying, There is nothing in this literary tradition that approaches the music, in terms of its complexity and depth. This was a commonplace formulation that seemed empirically true though there’s a great new book by Brent Edwards called Epistrophies: Jazz and The Literary Imagination (Harvard, 2017) which calls that so-called empirical truth into severe question. Still, for many, the music is at the top. 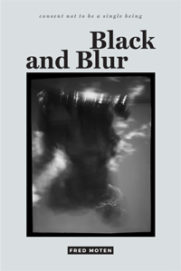 Moten’s Black and Blur joins with Edwards’s Epistrophies in challenging this longstanding status music has consistently held as “the top” influence within the African American artistic tradition. Exploring and exposing how this idea becomes a limitation, both books engage in a push to broaden the status quo, contributing to an ongoing re-formation of critical considerations shaping the tradition. Where Edwards offers an academically astute critical reading of a vein running through a broad cross-section of jazz history at points where themes or motifs of “literature” intersect, Moten implodes the subject area, assessing the various influences on artists and thinkers across the board—musicians, poets, philosophers, dancers, visual artists, etc.—what all is in the stew from out of which emerges an ongoing, if previously submerged, tradition that Moten is now a part of.

Edwards, it should be noted, is “attempting to do something more than provide nuanced interpretations of the formal interrelations between jazz and literature.” While later chapters do consider where and how jazz is taken up by poets such as Nathaniel Mackey and Ed Roberson, and there is (not too surprisingly) a chapter on Sun Ra’s poetry and music, other chapters focus on Louis Armstrong, Duke Ellington, Mary Lou Williams, Cecil Taylor, James Weldon Johnson, and Langston Hughes. The reach is broad. In many cases, Edwards dives into the archives of writings by these artists, including reproductions of manuscript pages and transcriptions, in order to push our traditional understanding of what constitutes the literary; in doing so he offers a fresh perspective on how writing itself embodies the physical experience. 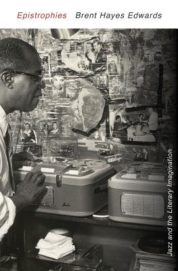 For example, in regard to Johnson’s versification in God's Trombones : Seven Negro Sermons in Verse, Edwards finds a distinctive “technique of transferring the ‘swing’ from the vernacular performing black body into the formal ‘body’ of the poem. In its manipulations of line, measure, and punctuation, the poem itself begins to be sketched out as a ‘breathing,’ ‘syncopating’ body.” Edwards sees Langston Hughes as having extended this practice into a “true compositional strategy.” He also examines the “zoning” practices found in Mary Lou Williams’ music by way of looking over her daily note-keeping, and includes a fascinating consideration of her musical relationship to Cecil Taylor’s practice as evidenced by the pair’s live concert album Embraced.

Edwards closes his book by asking “shouldn’t a criticism so deeply engaged with the art of innovation itself be innovative?” This is an exciting proposal, but as engaging as Epistrophies is, it comes nowhere near the complete revisualization presented by Black and Blur of what a critical text might be and how it might operate. Moten’s poems are decidedly of the experimental sort, often with a prose appearance, yet his prose here is most definitely neither poetic nor recognizable as a standard academic text. It is most definitely a creative critical engagement.

Implicit in Moten’s work is the idea that there are no firm boundaries. European critical theory and classical music are as relevant to the discussion as is consideration of contemporary art. In other words, while the engagement is with “blackness,” the discussion is ever attending to the (artistic) endeavor itself:

Blackness, which is to say black femininity, which is to say black performance, will have turned out to be the name of the invaginative, the theatrical, the dissonant, the atonal, the atotal, the sentimental, the experimental, the criminal, the melodramatic, the ordinary. It is and bears an aesthetic of the trebled (troubled, doubled) seer’s voice disturbed by being seen and seeing up ahead where escape, crossing over, translation will have meant the continual reanimative giving—unto the very idea of freedom—of the material.

Firmly grounded by his experiential perspective as a black man, Moten’s work enacts a broadening redefinition of the formal constraints of criticism: “it is our task to make an alternative practice, not form an alternative identity.” Reworking the expected narrative of a critical text by embedding a “blackness” throughout that refutes assimilative forces.

Moten slings astute references to postmodern theory with the best of them, but is equally not to give a nod to a friend’s remark. Consideration of a musician leads to a riff on a personal remembrance of deep recognition felt with an artist’s work, back into a passage from one philosopher or another followed by a further riffing from this or that performance or exhibit. The whole is a swirl of relations bound together by Moten’s discernment and critical reading as he follows the flow of associations along. Moten’s writing more than welcomes that motto of Coltrane’s he mentions in the Rail interview cited above: “It all has to do with it.”

In the same interview, Moten acknowledges, “When I read Derrida the first time it wasn’t like I knew what was going on, it was just that I knew I wanted to read more. So I kept reading.” That sums up how readers might best approach Black and Blur: Be ready to be wowed; be ready to be challenged; most of all, be ready for the long haul. It is, apparently, the first in a planned trilogy. Moten is tracking his own course, and it’s fast-moving and spectacular.

Click here to purchase Epistrophies
at your local independent bookstore