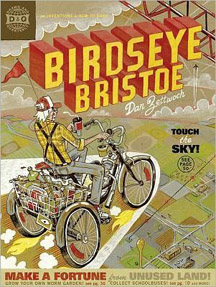 There’s an elderly man who lives in my neighborhood named Wally. He’s slow-moving, meticulous, set in his ways, and tends to be mildly grumpy. When I chat with him, he gives the distinct impression that all of the changes he’s witnessed in the 40-plus years he’s been living in our neighborhood have been categorically for the worse. Nonetheless, Wally takes an interest: he makes it his business to maintain an encyclopedic knowledge, in granular detail, of the goings-on around our block. He thinks more than he speaks.

In all of these ways, the title character of Dan Zettwoch’s accomplished and affecting debut graphic novel, Birdseye Bristoe, reminds me of Wally. Named after the townships Birdseye and Bristow in south-central Indiana, where he was born and lives, Birdseye, like Wally, is a curmudgeonly old man who takes an interest. His hard and abrasive exterior is a shield to protect a quick mind and a tender heart. And, although he’s a resourceful and inventive individual—evidenced by the plethora of ingenious devices he’s crafted out of bungee cords and empty plastic soda bottles—he is no fan of progress for progress’s sake.

Unfortunately for Birdseye, in the summer of 1998, progress comes with a vengeance. The town is getting its very first cell phone tower, and in the literal and figurative shadow of this looming symbol of modernity, convenience, and “connectivity,” Birdseye’s great-niece Krystal and great-nephew Curt come to visit. Their ensuing daily adventures—harvesting nightcrawlers, exploring ancient broken-down billboards, drinking Uncle Birdseye’s “Red Cow Hot Blood” ice cream shakes, and passing the time with Tump Junior, Carlene “Hippie Chick” Clay, Sonja Pike, and other residents—are captured by the author in a series of delightfully engaging free-standing vignettes. (In effect, the book is closer to a collection of very short graphic stories than a graphic novel.)

As the trio go about the business of their lives, their dorky, earnest, and tender souls are revealed in every lovingly rendered panel. The story begins as amusing, lighthearted fare, but by its conclusion has become something much deeper and more significant. As with David Lynch or Raymond Carver, the quirky genius of Zettwoch’s storytelling lies in his affection for his bizarre characters, and in how they face the risk of deep spiritual trauma in the very shallowness of the circumstances of their world.

Zettwoch eschews clean, flowing brushstrokes and tasteful ink washes in favor of a scratchy, brightly colored art brut style: his tools are basic ballpoint pen and whiteout. Visually, the work is reminiscent of Gary Panter or Ben Katchor (although Zettwoch also shares Chris Ware’s obsession with diagrams and blueprints.) But for all the homespun appearance of the visuals, Zettwoch is clearly a gifted draftsman with a mastery of the tropes and techniques of comic storytelling.

With this book, the author has captured the melancholy and heartache of childhood, adolescence, old age, rural life, and family ties; the casualties of the inexorable and unquestioned march of “progress”; and the bravery of the people who wage their own private battles against it. The treatment is entirely unsentimental and powerfully effective, makingBirdseye Bristoe one of the most impressive debut volumes in recent memory.