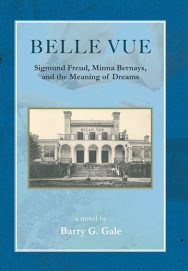 It’s not easy to write about Freud, especially if you want to present him in a way that challenges received notions of his character. Freud’s official biography has him as a sober, self-disciplined, and sexually conservative investigator of the realm of the unconscious. This is precisely the image that Barry G. Gale’s novel Belle Vue seeks to upend. Gale imagines that Freud had a sexual affair with his sister-in-law Minna Bernays, not an improbable scenario on the basis of available evidence, yet one that is not generally accepted among dyed-in-the-wool Freudians.

The case for the affair began in 1953, when Freud’s former disciple (and subsequent bitter enemy) Carl Jung reported to Kurt Eissler (the first Director of the Freud Archives in Washington, DC) that Minna had confessed to him an intimate relationship with Freud. Minna never married and lived with the Freud family in their apartment in Vienna (occupying a room that could only be entered through Sigmund and Martha’s bedroom) from 1896 until the family immigrated to England in 1938. More tellingly, Minna is known to have traveled with Freud sans Martha on many occasions. In 2006, another seemingly damning document surfaced: a hotel entry in Freud’s handwriting from the Schweizerhaus in the Swiss town of Maloja, dated August 13, 1898, that reads “Dr. Sigm. Freud u[nd] Frau,” although it is clear from the documentary record that Freud was traveling not with Martha, but with Minna.

What to make of all this? It’s a lot of fun, of course, to imagine a more raunchy, sexually liberated Freud than the one we’ve internalized from his stiff, cigar-smoking portrait. Gale, who has heavily researched the atmosphere of fin-de-siècle Vienna, renders the case for the affair into fiction with mixed results. For the sake of narrative cohesion, he dates Freud and Minna’s intimacy from the spring of 1895—mainly so that he can link it to the momentous summer in which Freud dreamed the “Dream of Irma’s Injection,” the centerpiece of The Interpretation of Dreams (1900). He also compresses events (as novelists are wont to do) in order to heighten the drama of Freud’s family life, including its hidden tensions and ambiguities.

Gale has done his homework on Freud’s writings, the trail of evidence connecting him to Minna, and the intellectual and social ferment of the times. He portrays Minna as a free spirit, heavily influenced by the philosophy of Nietzsche and the concept of the “New Woman,” both of which were circulating in the coffee house culture of Vienna. Gale goes so far as to provide her with progressive female friends, such as Helene von Druskowitz, the first Austrian woman to earn a PhD, and Hermine Wittgenstein, elder sister of the philosopher Ludwig Wittgenstein.

The narrative, which is centered on a single day at Belle Vue (the summer resort to which Freud’s family regularly repaired during the sweltering Viennese summers), includes many flashback scenes, chiefly involving Minna; these serve to elucidate the rising conflict between Martha (heavily pregnant with her last child Anna) and Freud over the attraction between her husband and her sister. Martha’s suspicions throughout the day are fed by her dominating mother, Frau Bernays, leading to a confrontation between husband and wife late in the evening of Martha’s birthday celebration at the hotel.

Gale succeeds in humanizing Freud, whose major biographers tend toward hagiography, but even more importantly he gives voice to the significant women in his life. The documentary record is thin regarding the inner thoughts and conflicts of women such as Martha, Minna, and Frau Bernays. Gale gives each of them their due in imagining their individual subjectivities, making them convincing characters in what must have been at best a complex state of affairs. It doesn’t matter so much if he “has it right” as whether we can take a fresh look at Freud through the perspective of the important and powerful women in his life.

Take Gale’s characterization of Frau Bernays as a sharp-eyed, no nonsense kind of woman who worries (appropriately) about her son-in-law’s ability to support his family and who observes the intensity of the attraction between Freud and Minna long before Martha does. Minna, too, comes to life as a sharp-witted, if somewhat impulsive and unrealistic, advocate of women’s rights. Gale’s greatest achievement, however, is his characterization of Martha, who wins the reader’s sympathy through her loyalty to her husband, devotion to family, adherence to her own principles, and courage in confronting Freud with her suspicions.

On the minus side, the ultra contemporary tone of the dialogue can be irritating: “I don’t like this, Martha. And you shouldn’t either. At the same time he is lovey-dovey with Minna he pushes you out of his bed.” Its occasional weak prose aside, however, Belle Vue will challenge you to think differently about Freud, the complexity of the time in which he lived, and the density of his inner life.