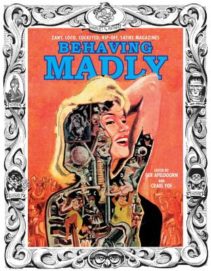 Opening this wonderfully odd volume, we find ourselves plunged into the vanished pulp world of the 1950s. As the era of the historic slick magazines like Colliers waned and the low-priced paperback trade multiplied many times over, comic books notoriously went into a crash mode. The Comics Code, threatening circulation-death of any that violated new sex-and-violence standards, had a lot to do with this crash. But so, of course, did TV, reaching from the coasts to the smallest flyover towns. For illustrators, comic book artists and others, it was a crisis, as it became for theatrical (animation) artists, and for analogous reasons: the grand movie studios no longer cranked out thousands of cartoons for audiences now sitting in front of televisions, buying ever fewer pulps of any kind.

For those sufficiently skilled and connected, there would always be consolations, including advertising studios and, for television, Hanna and Barbera (Huckleberry Hound, et.al.), not to mention paperback cover art and such. And there was one amazing print-media growth industry, mostly short-lived but seemingly enormous: wacky humor.

In major college towns, campus humor magazines had provided audiences with spicy cartoons and gags since at least the 1920s, succeeding higher quality, if less sexy, humor magazines like the pre-Henry Luce Life, among others. Mad Comics, launched in 1952 on the power of Harvey Kurtzman and his gang of artists, opened up a new era. Within a few years, as the story goes, parent EC comics faced a crisis of censorship. Kurtzman proposed to his boss, William Gaines, a slick version. Thus, Mad Magazine was born in 1955, and as a toned-down and younger-demographic version of Mad Comics, it caught the wave, its readership reaching millions within decades.

No wonder copycat magazines emerged overnight, like weeds on a summer lawn. Actually, a bedrock of the massively profitable 1940s comic book industry had been the “swipe,” both of artistic gestures and of genres. If one superhero appeared in seemingly silly outfits and with seemingly silly superpowers—to take the profit-leading example—there would soon be dozens, even hundreds, many of them in smaller companies likely to crash in the near future, like Superman with Kryptonite close at hand. Publishers with sudden success also often produced their own imitations, Mad begetting Panic, for example, with most of the same artists in the early 1950s. Paper was cheap in those days, with sales in newsstands and drug stores full of customers of all ages, all looking for something fresh and different. Behaving Madly celebrates the output of these magazines. In charge of the selection and annotation: Ger Appledorn (a Dutch television and comics writer who actually edited a short-lived version of Mad in the Netherlands) and Craig Yoe, born editors mad, so to speak, for identification and annotations even among the dreckiest of dreck. Thus the Introduction is something of a marvel (if not related to Captain Marvel). We find Snafu, Bunk!, Cockeyed, Lunatickle, Thimk, Who Goofed?, Frenzy, Shook Up, Loco, Nuts, Zany. and Frantic, not to mention the name-changing Crazy, retitled Crazy, Man, Crazy and again This Magazine is Crazy, among others! I admit to missing Sick! and Cracked, which both came later and are not excerpted here, or Kurtzman’s three post-Mad productions, Trump, Humbug, and Help!, reprinted or heavily anthologized elsewhere. Everything, each item in this curious saga, is carefully listed with years and leading artists, often enough experienced artists at their peak and not quite finding a place in the diminishing pulps. The lowest of the low, in the estimation of the high class magazine artists, get their due.

And so does the satire of modern life, in the Mad style, albeit knocked off: films, television, advertising, slick magazines, popular literary classics (think Frankenstein), popular science, even sports. Many are drawn by some of the greats, like Mad’s Jack Davis, obviously looking to pick up as many jobs as possible. Some stories are ripped off directly from Mad satires, making them effectively satires on satires. The amazing thing is that the near-anonymous along with the once-notable are so carefully credited here.

What makes these pieces notable as well as fun? Comics scholars without or without PhDs will, for instance, want to see what legendary Stan Lee was doing with Snafu (1955-56). They will find that he was pushing the envelope on sex—no surprise, given that the 1930s pioneer publishers of the comic book industry had been busted on a pornography rap only a few years earlier. The suggestive stuff here seems awfully tame. Captain Billy’s Whizbang and the current college mags—some of them banished by campus authorities—were certainly more suggestive. This luke-warm Hot Stuff was, after all, just one more pulp gambit. Readers will likewise want to glance at utterly tasteless satires, like one of “falsies” (a fooler: this is mostly about denture cream), and also at the rare appearance of Will Elder, Basil Wolverton, and other notables in these super-marginal venues. These are, or were, the pulps, after all, drugstore items bought and soon forgotten, a footnote to popular culture.