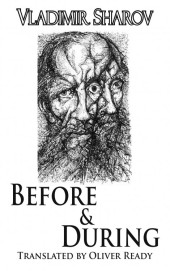 Short of acquiring fame, our earthly lives are destined for oblivion. For a time after we die we live on, so to speak, in the memories of friends and family who survive us. But when they too die, any real understanding of the life that we lived or the person that we were is gone. Alyosha, the narrator of Vladimir Sharov’s Before and During, seeks to rescue the dead from obscurity.

Set in Moscow in the mid-1960s, Before and During feels like two conjoined novellas, so apparent is the shift in style and direction between its two parts. The first takes place before Alyosha is admitted to a psychiatric hospital to be treated for his sporadic blackouts, the second during his residency at the hospital. In the novel’s opening pages Alyosha begins writing a Memorial Book in reaction to his own memory loss—although he can’t remember episodes of his own life he is seized with the duty to record the lives of others, to memorialize the lives of the dead as a way of resurrecting them.

In the hospital Alyosha resumes work on the Memorial Book, but now attends exclusively to the memories of the hospital’s elderly patients, many of them former high-ranking Soviet officials who use the site as a retirement home. Here Alyosha becomes convinced that his project has messianic importance—God has abandoned mankind and will return only if he faithfully records his fellow patients’ memories. Without their inclusion in his Memorial Book, man’s greatest error—his retreat from God—will be repeated endlessly.

Sharov’s characters, loyal to their Russian literary heritage, struggle with theology—they long for God’s comfort and despair when they disappoint him. But at the same time they deny a role for God in Russia’s future. They recognize that godless communism has rent a hole in society’s emotional wellbeing and yet, except for Alyosha, they do not recognize a place for God in fulfilling Russia’s destiny to lead the world into a brighter future.

Sharov’s novel confronts big, philosophical questions and frames them in an interesting context, but the book stalls under the weight of its ambitions. Too much, both stylistically and narratively, is attempted, creating a disjointed and chaotic impression at times. The juxtaposition of the French writer and socialite Germaine de Staël with Alyosha—her fantastical, long life and disregard for death versus his preoccupation with death—should amplify Alyosha’s philosophical journey; instead, her story distracts in the great number of pages devoted to it and Sharov’s stylistic shift to magical realism.

Nevertheless, Before and During justifies Sharov’s place as one of contemporary Russia’s most significant literary voices, and Oliver Ready is most deserving as the winner of the 2015 Read Russia Prize for his remarkable English translation of it. The novel’s theme that a life is nothing more than others’ memories of it may feel bleak, but memories, as witness to our past, also offer hope: that humanity can avoid repeating history’s mistakes, that we can free ourselves from committing the same unpardonable crimes against our fellow man.