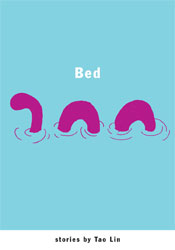 “Where were you when the towers happened?” someone is asked in Tao Lin’s debut story collection, Bed. The trick there, of the verb, is precisely what Lin is after—a way to capture the larger cultural moment of post-9/11, a moment defined less by planes, fire, and death as by, say, the free movie screenings in Washington Square Park, the missing person posters, the aimless wandering coupled with an urgent search for some sort of meaning. As Lin approaches it, the wake of 9/11 provides a lens for looking at how people get by with the day-to-day of existence: passively, with neutral expressions, via a sort of emotional somnambulism, crackling at times like a sheet of ice bearing too much weight.

Sick poodles, people who don’t give presents, kids listening to audio tapes on how to overcome social anxiety disorder or kids drinking beers in the movie theater watching Garden State: these are the sorts of ciphers Lin shuffles through his text, offering at times a parable of Patriot Act America, “a time of increased lawmaking” in which “things were generally banned.” Paranoia simmers on the back burner. Exotic sea animals beach themselves. There is a rash of low-profile suicides. Yet Lin’s stories hinge upon a sense of things being more or less ignored, peripheral to the particular subjective moment. The current zeitgeist is identified by Lin as “a general drift towards the arbitrary view, the solipsistic and apolitical.” Thus he populates his stories with slackers who slog through life, staying in bed when they can, aimlessly eating, engaging in rambling discourses, dissatisfied but slightly numbed to their dissatisfaction, their lives reduced to “the padded practice of a thing before the real hurt and triumph of the actual thing."

Bed repeatedly addresses the disconnect between desire and the tar pit of reality. The cultural myth of love is presented via accurately preposterous metaphors: an unattainable commodity; a hoax people invest time and energy in perpetuating, like the Loch Ness monster; a flying skeleton cackling cruelly, always out of reach. But Lin’s interest in disconnectedness leads him, ultimately, to focus not on our fluctuating relations to constructed ideals but on the act of writing and the textual surface. His interest is in the dynamic between writer and reader. He highlights seams between moral longing, analysis, and actual lived moral practice, between the neat frame and symmetry of literature and the mess of lived reality. He pushes these issues to the point of paradox: moral action is contradictory, if not impossible. Likewise, realist writing gives us a world “where tea [is] brewed, earnestly, from paint chips, glass shards, and small change,” but that is not our world, where such a mix boils down to poison. The text is at once resolutely earnest and sarcastic in its dismissal of earnestness, committed to moral ideals and ironic in the invocation of such empty and dated concepts.

In Lin’s novel Eeeee Eee Eeee, released simultaneous with Bed, this double play is heightened by prolonged discussions of politics and ethics, traced back both to banal daily decisions (the ubiquitous moral quandary of what to eat, for instance) and to the reflexive critique of writing and reading (via references to the entertainment industry, both movies and books). This text, in the midst of one of its either earnest or ironic discussions, provides a model for thinking about Lin’s own stylistic play:

“What do you think about the president?” Andrew said.

Mark put noodles into his mouth. 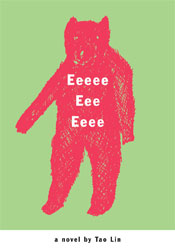 This idea of the twice ironic echoes throughout Lin’s approach. He is twice ironic, twice earnest, but also twice nihilistic, twice moral. Eeeee Eee Eeee’s characters wallow in their depression and/or are cleverly detached from that depression. These discontents find themselves making illegal u-turns or philosophizing in circles, angry at existence itself. One of the funniest bits of the novel (and Lin can be a very funny writer) is the splicing in of fragments from a stock trope of our culture, the “killing rampage,” a collective media-based fantasy popping into characters' heads at odd moments: “killing rampage,” “suitcase full of cash,” “high fives on a diamond boat.” The humans in Eeeee Eee Eeee share space with animals. There are talking dolphins and bears who club movie stars to death, plus, as always in Lin’s work, hamsters. These animals give the work a vandalized edge, as if Lin had finished it and just folded it back, scrawled over his own completed sketch, another double play, either wry or straightforward. Lin’s writing is all surface and/or all depth. The prose is like a hamster wheel, spinning: “Whee,” says some human, and then a bear breaks open his skull. Lin writes like Andy Kaufman wrestled: concealed behind layers of surface image, unreadable in intent.

Later in that conversation about the president, Mark responds with an argument that “irony is so privileged.... It’s what happens when you don’t need to do anything to survive—it’s when the things you do have nothing to do with survival.” Yet irony is a survival mechanism as well, anesthetizing and armoring at the same time, and in these texts, in which we as readers are reminded of horrors both individual and international, of greed and corruption, economic control, and in which we are offered rationalizations for why playing chess or practicing the piano, as expenditures of time and energy, as “politically apathetic” denials of other options, are themselves as deadly as war, as murder, snide withdrawal is the safest, most comfortable option.

Comfort is the ultimate goal for Lin’s characters, not some imaginary release from suffering but the temporary succor of ice cream in bed or the soothing retreat into solipsism, something practiced on a grand scale by the writer valorized in one of the novel’s final discussions, Fernando Pessoa. The Portuguese poet is praised by Lin’s characters for his realistic treatment of the problem of suffering, but as a master of stylistic double play he is certainly high in the lineage of which Lin himself is working. Pessoa pursued a paradoxical egotistical “denial of self” on the level of literary practice, writing under various invented personas, yet on the political level he combined uber-nationalism with ego-centered religious fanaticism for a potent fascist stance. To treat Pessoa purely as a stylist is more than a stylistic choice. Yet “how can you be angry at someone else’s assumption or context that was as arbitrarily chosen or adopted as your own?” another Lin character asks, baffled.

These candy-colored paperbacks are designed to maintain that neutrality, to remain undecided in the face of such questions. They both amuse and accuse their amused readers of bad politics, bad faith. The idea of the moral is dangled in front of us and then collapsed. Exertion is followed by failure, and passivity takes the place of any possible action. “Everyone should be impeached... for being so bad at living,” we are told. Except, of course, that such an act is absurd, and would be pointless, incomprehensible and meaningless as a dolphin’s squeals.

Click here to purchase Bed at your local independent bookstore