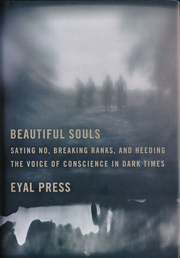 It is always a dark time, and so this book couldn’t be more relevant. In it, Eyal Press deals with individuals who followed their conscience during the Nazi nightmare, the Yugoslavian atrocities, the current stalemate in Palestine / Israel, and the moral swamps of multinational financial companies. Unlike most typical investigations of dissenters with deep-seeded faith—either political or religious—who are already at odds with the prevailing cultural drift, Beautiful Souls presents insiders who must break with the very group they are part of in order to resist. And because of this, Beautiful Soulsis an important book. But it is Press’s ability to infuse the narrative with an obstinately optimistic view of humanity that makes it such a readable and enjoyable book.

One question drives these accounts: “What caused this person to disobey?” Examining the power of these people’s resistance, it’s easy to put them into a category that’s beyond us, but that’s as dangerous as seeing perpetrators as “monsters.” It’s essential to claim the humanity of both sides, and see ourselves in it. Psychologist François Rochat is quoted as saying that it was rare for people to rescue Jews during the Holocaust, and therefore “one is tempted to think that they were indeed outstanding people, some kind of saint, or heroes of goodness, which in turn means . . . that they are not like us.” This mindset removes them from us, he says, because “they are great people, outstandingly good, which we don’t think we are.”

On the other side, we also don’t see ourselves as ruthless and cruel, people capable of inflicting pain on others. And yet, Press shows that ordinary people who go along with the flow have the capacity for just such things. One factor in this process is what Bibb Latané and John Darley call the “diffusion of responsibility” (the title of their book, the Unresponsive Bystander: Why Doesn’t He Help? which Press cites, asks another important question). Whether it’s Milgram’s disturbing experiments or the analysis of Polish sociologist Zygmunt Bauman, the social dynamic in which we decide is critical. Bauman boldly states that “cruelty correlates with certain patterns of social interaction much more closely than it does with personality features.” The farther away we are from the victim and the more we can pin responsibility for our actions on “higher ups,” the more likely we are to obey and the less likely we are to intervene.

Pair those distances with a more immediate force—the power of conformity—and it is easy to see why there are so few resisters. Conformity pulls at us all because we feel the “pain of standing alone” which is another dimension of the social dynamic. In chapter one, Press presents a Swiss state police commander named Paul Grüninger as an example of someone who breaks the law. It’s important to note that upholding the law, even immigration statutes, was part of Grüninger’s job. His colleagues did not presume to take the law into their own hands, did not risk job loss and reputation loss (and Grüninger did lose both); they didn’t make the law, right?

Press shows why Grüninger’s actions were rare. He does the same with Aleksander Jevtić, a Serb who found himself rounded up by fellow Serbs and crammed into a shed and told to gather up the other Serbs. The remaining Croats would be tortured or killed, and having been beaten in a gauntlet on the way to the barn, the end was clear. Jevtić casually started picking men he knew, on the spot calling them Serbian names, and sending them to safety. Press says that he “stopped only when no more bodies could be squeezed into the area designated for ‘Serbs.’”

The last cases were not spur of the moment choices, but long, slow agonized decisions. In one, an elite Israeli soldier wrestles with his training, his values, his family history, and his national identity. Avner Wishnitzer says the physical demands of his unit set the bar high, but disobeying the army was “ten times harder.” And in the final chapter, a broker for a US bond dealer decides to blow the whistle on shady dealings. Even the epilogue profiles Darrel Vandeveld, a military lawyer who eventually worked on one out of three Guantánamo cases. Through his own painful journey, Vandeveld arrives at the brink of his own decision: refusing to prosecute what had appeared to be “a perfect case.” To do so, he had to not only buck the system but the memories of those lost in battle.

In our own dark times, with issues ranging from bullying to corporate malfeasance, from immigration questions to military actions, each of us must remember that our decisions at school and at work have a moral dimension. Someone is at the other end of the “return” key. Someone is subject to the laws we vote for. Someone is trusting us to do the right thing.

The author helps us understand the simple, everyday ways we justify keeping our heads down, crafting each story in such a way that we begin to wonder, why did this person disobey? And the answers are just as simple. These factors make this a book of hope, a hard-won and clear-eyed hope. The ideas that Press identifies linger long after the details of the stories fade, in part because they are profound. And so, I won’t spoil the grace and thoughtful rewards of Beautiful Souls by itemizing them here. Buy it, read it, use it in book groups and faith communities. Give it to friends and enemies alike. Then sit down and discuss what you encounter.