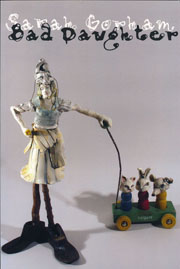 Sarah Gorham's fourth collection of poetry, Bad Daughter, is a varied and dynamic meditation on the many manifestations of family life, from husbands and wives, to sisters, and especially mothers and daughters. Gorham's poems consider these relationships from a multitude of viewpoints, including prayers, deconstructed sonnets and more, all the while working in a lyric style. Gorham has an ear for music and many of the poems have a pleasing sonic quality to them, though at times the lyrical qualities of certain poems take precedence over sense, and the reader can occasionally get lost.

The strongest poems in Bad Daughter subtly evoke an event or emotion with sharp imagery, tight lyricism, and just enough strangeness to challenge the reader, but not elude them completely. "Juncture," for example, begins:

like a row of horseheads,
or ghost parapet
permeable

as in your dream

A series of metaphors describing a particular scene, the images are clear and easily envisioned, and the word choices give the poem an ethereal yet foreboding quality. But the real skill of the poem is the subtle way in which the ending fulfills the promise of the beginning, extending the reach of its imagery to deepen a specific moment of emotional relevance in the speaker's life:

resistance—
she has stood firm
as long as she can

there at the horizon
where the clouds begin.

Thus the emotion evoked by the opening images of the poem is brought to bear on the terrible futility one experiences upon the loss of a parent or the deterioration of their health, deepening it by avoiding the sentimentality inherent in such a situation. By the end of the poem, the mother seems like a part of nature, enshrined forever in the speaker's memory in particular images or scenes.

"High Tea" uses this same sort of strategy, interspersing snatches of conversation about a possible murder with the details of an uncomfortable family meal. It beautifully captures the naivety and innocence of children in the wake of death:

No fighting. There's been a death.

For second helpings, for the plates clattering and scraped.
For more waiting, our bodies like the itchy center of the sun.

And then a couple lines later:

Someone may have murdered him.

For the crumbs swept into a bowl. For the napkins folded and piled.
Chairs squealing, candles blown.

There'll be an investigation. Your mouth . . . wait

The linen stiff, the weep forbidden.

Consider for a moment that arresting movement from "Someone may have murdered him" to "For the crumbs swept into a bowl. For the napkins folded and piled." It's as if the victim was murdered because of these trivial dinner table actions; this constant piling of speech onto details creates a very clear tension between the world of high tea and that of the dead man, though the narrative implicit within the poem is never revealed. These jarring shifts in tone also deftly mimic how children interpret, or perhaps fail to interpret, significant events like death. And like "Juncture," it's as much about what is not said as what is said. These particular poems succeed because they bring the reader into a moment with the speaker without being heavy-handed and expository, while at the same time allowing the reader into the world of poem.

At times some of the poems seem a bit too heavy-handed and dry, or else give the reader very little to experience with the speaker. Take "Sixteen," which begins the collection's second section:

Most were but flickers
that lifted her to smoke,
the one I grew to care about
she burned with lines of coke.

Then glanced a tangerine glower
and shed an orange pride
and conjured the toughest boy of all
to push my love aside.

While the poem has a lovely music and some interesting moments, its inclusion in the collection seems a bit baffling. Its title and place at the beginning of a new section seem to indicate that we've moved forward in life, that the speaker is in adolescence, and thus things are changing. Yet the reader is given next to no context in which to see the poem's action, and the specificity of the action and the colors have little meaning for the reader overall. Poems like "Juncture" and "High Tea" build tension and seem to tread lightly on the page; "Sixteen" simply feels clunky by comparison. And there are several other such poems in the collection, which seem to draw the reader out of the poem's world and declare themselves to be poems.

Despite these occasional moments, Gorham's skill in controlling and manipulating voice and tone makes for a number of wholly original and enjoyable poems. Bad Daughter is ultimately a pleasure to read for its sharp imagery, unabashed lyricism, and its deft portraiture of the vagaries of family life.