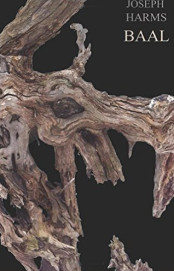 There is much to admire in this self-published Midwestern horror gothic—it contains amazing landscapes; the writing moves beautifully between the realistic, the satiric, and the lyric; and the whole thing operates as a denunciation of patriarchal religion and patriarchal sexuality. It also has a beautiful and well-designed cover (still too rare in self-published works). But Baal is both strangely sexist in its treatment of female characters and gleeful about its use of disabled and non-standard bodies as symbols of depravity and evil. It is a fascinating and accomplished book, but a flawed one.

Baal reworks the familiar story of two youths on the cusp of adolescence who discover that while Satanic evil is real, human evil is even worse. Cassius and Max live in an anonymous Michigan town, a place that brings together all the banal American evils: industrial decline and poverty, covert and overt racism and homophobia, religious hypocrisy and domestic violence. In the forests and rye fields beyond the town, they encounter monstrous beings; in the town itself they commit greater and greater acts of violence to fight back against the religious and patriarchal order that crushes them. In the end, the two worlds are shown to be the same.

Patriarchal violence and patriarchal sexuality are the substrate of the book. All fathers are violent and those fathers who are not sexually abusive seem, like Cassius’s drunken stepfather, continually to hint at this possibility. The bad father who hits you is part of the great chain of fathers, linked to the spiritual leader who conceals and justifies social violence and to God the Father who is also Satan. In Baal, there is no outside to this father system, only war against it from within, and all fathers are the Father of Lies.

To create this atmosphere Harms gives Baal its own language, rapid, dense and baroque—a language of darkness briefly and brightly lit, of the edges between nature and the city. Front-heavy and full of run-together words, the sentences have odd rhythms. They are difficult at first reading, then sharp and vivid, as when Cassius reflects on God:

Us untouchables born from the yawning mouth of a tree dead a thousand years in the center of a wilderness yet imagined who crawl from the dirt to return to the dirt and in our allotted time, make of telephonepoles corpseornamented alters to the real God who blesses every war waged by one alone and blesses none made by many. But Cassius could not pretend more than an instant that such a God existed.

Harms well describes the particularity of the waste places of the world, spaces we know intimately when we’re children—the territory where the suburb fades away into woods, a certain rotted tree marking a boundary unvisited by adults, the way it feels to walk through the semi-abandoned empty farmland on the edge of town. His landscapes are beautiful and nostalgic even when menacing, full of the gold of the rye fields and the drift of leaves. “Beyond the dark alleys between homes,” writes Harms, “the sussurant corn by lapidary moon cut and metalized looked like the foamy wake of a wave about to break.” But in these waste landscapes anything can happen. Nature isn’t a refuge.

This is the world as Bad Place, ruled by a Bad God. Cassius encounters a variety of believers, each attempting to put an acceptable face on the world. All make their cases; none convince. There are the trivially self-serving and ugly homilies at the church his mother forces him to attend, of course, but also powerful consolatory discourses like this from the African American security guard working a grotesque church youth event:

"Let me tell you something, kid . . . There is no white god. White people can’t believe in God ‘cause they think he’s white. But there is a black God. Giant and mighty. And he snuff you out you so much as bad mouth him in an empty room . . .
. . . 'Cause he know about pain and torture, son. He know about murder and rape. He know about stealing for food and killing for food. He know about being an outcast. 'Cause he was born an outcast . . . Black God sees us trespassing with blood and knives and guns and he weeps and begs us, son, begs us to come to him for forgiveness because he knows he’d have done the same thing in our shoes."

But all these discourses are inadequate to the sheer material evil of the world that Cassius encounters. Evil returns, generation after generation, seemingly unstoppable, steadily worsening: “Since the great fires what had happened here and there and mostly during wartimes happened everywhere in the city at all times.” Cassius and Max go to war against the Bad God, to fight what can’t be fought, to kill what can’t be killed.

For most of the book, Cassius is a compellingly written character. Sometimes he appears as a realistically portrayed bright, angry, frightened teenager, sometimes a prophetic voice, sometimes an outlet for the author’s own discomfiting comedy. He would be a stronger character if he weren’t right all the time, though, or if he were purely an allegorical figure and Baal an inverse Pilgrim’s Progress. Again and again, other characters are self-deluding and hypocritical, and Cassius calls them out. He is always right, always better, always heroic even when weak and in despair—and it starts to make the deck seem stacked in his favor.

We’re meant to see Cassius as the book’s moral center, but his actions are driven by the same logic as the actions of the fathers he fights—his morality is based around homosocial love for the males with whom he commits violence; his own violence is justified by threats of violence to women; he identifies himself with a fantasy of female experience while finding real women only unloveable hypocrites and naives.

Female characters in Baal are good (and ultimately dead) or else they’re bad examples who are schooled by Cassius. Almost all of them want to sleep with him except the ones he actually wants—but nothing good, plot-wise, comes of being a girl who friendzones Cassius. Most implausible is the sequence where the church secretary, old enough to be his mother, flirts aggressively with him in front of his entire religion class. Cassius attempts to seduce her and then helpfully tells her, “If you weren’t confused, you’d kiss me tonight.”

Cassius’s savage war against the Chief of Police is motivated by the Chief’s abuse of his daughter and the complicity of the Chief’s neighbors, something Cassius hears about second-hand. He gives a great deal of thought to the feel of the sexual abuse the daughter must endure, and to his “duty” of violence. Unfortunately the daughter herself is virtually absent from the novel. This is doubly frustrating because some of the most subtly written scenes in the book depict Cassius’s conversations with his mother and with a sexual partner, Tina—at least until they veer off into Cassius’s sage corrections of petty female misapprehensions.

Readers should also be aware that Harms’s characters use racial and homophobic slurs freely. Cassius is white and straight; his best friend Max is black and coming to terms with being gay. At one point the boys pretend to be a gay couple, mockingly and with grotesque exaggeration, in order to anger and disgust their enemies. The book’s handling of queerness and race seems sometimes almost to tip over into a kind of masculinity-sentimentality, but the book also manages to treat race, racism, queerness and homophobia all as aspects of the world rather than as special problem topics or as things which must not be named. Many horror novels are haunted by racism and homophobia; relatively few center gay characters or characters of color.

Perhaps the most difficult to accept aspect of Baal is its treatment of bodily difference. From the very first scene, when evil is introduced via a hermaphroditic man with Downs syndrome, Harms uses grotesque, rubbernecking descriptions of age, disability, and body size to signal the presence of evil. In the final, apocalyptic sequence, disabled bodies are torn apart and victimized, while Harms refers to each one as “a Downs.” Much is made of the fatness of these disabled men, and of what Harms perceives as their sexual childishness and ambiguity.

Fatness, indeed, justifies almost anything here. Fat Rosemary in “religionclass” is, naturally, a hypocrite and a bully, and we’re meant to sympathize with Cassius, Max, and their friend Henry as they target her. Tina’s mother is called “the Cow”; per the narrative, she has chosen to become too fat to get out of bed, just as she chooses to lie in her own shit. Fatness justifies the book’s rape joke—not only do we hear Henry repeat the old canard about how a fat woman is too ugly to be a rape victim, but Cassius reflects that “Henry is right, nothing is sacred beyond laughter.” No one laughs at Cassius, but the reader is invited to laugh at this trio of fat women.

Baal, in short, risks reinscribing for the reader the very hierarchical, hateful, violent father-system it denounces at a rhetorical level. That is by no means all this intelligent, creepy book does—but it is impossible to ignore.

Baal is a beautiful, fascinating and thoughtful horror novel—a Midwestern regional novel in a genre that tends to be either placeless or coastal, and a novel which names and foregrounds race and sexuality. But it still reiterates some of the more conservative horror tropes: abused and dead girls as fascination and motivation for the boys and as titillation and motivation for the reader, boys as heroes and moral actors, the physically different as a marker of evil. Perhaps future work from Harms will be as innovative about gender and embodiment as Baal is about language and region.