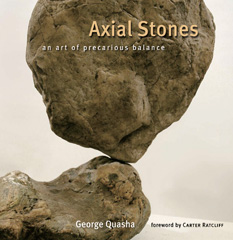 George Quasha’s extraordinary sculptures place natural stones in a state of breathtakingly improbable balance. This fitting follows strict rules: one rock must be balanced on another at a narrow point of contact; no adhesive is permissible, nor may either rock be modified in any way. The result is so delicately balanced that, in Quasha’s words, “sometimes even a breath can bring it down.”

The title of this sculptural series and the book that documents them, Axial Stones, draws attention to the axis around which each configuration must, out of deference to gravity, be organized. As explained in the foreword by art historian Carter Ratcliff, most axes—the axis of the earth, for example, or the crossed axes of a Beaux Arts building—are not only clear, but also stable and permanent. The axes of Quasha's Axial Stones are different: clear and for the moment stable, but charged with an air of contingency.

Quasha has called this dialogue with the natural world speaking in stones, and in the book he uses image and text together to help visualize this process. He tells the stories behind the works, the principles driving the work, and the connections with other of his art practices. For Quasha, an axis is like an intention: a force that generates possibilities as well as order. Every esthetic advances some kind of hope, for truth or clarity or beauty or whatever. “Quasha’s esthetic,” Ratcliff writes, “is driven by the hope that possibility will always be open and fresh, never predictable.” The stone sculptures themselves are open-ended, minutely moving all the time, as the Earth moves. That’s why axial stones can remain where they are for months and years, and suddenly, unprovoked, they fall.

As a young artist, George Quasha was liberated by the interdisciplinary ideas of composer John Cage and poet Robert Duncan, among others. He moved to Barrytown in the early 1970s, when he was teaching at Bard College, ultimately enticing Fluxus artists Dick Higgins and Alison Knowles to join him. Along with his wife, Susan, he founded Station Hill Press, which specializes in publishing art, poetry, and philosophy, with titles ranging from presentations of work by performance artist Gary Hill to novels by French thinker Maurice Blanchot. A recipient of a National Endowment for the Arts fellowship in poetry in 1975, Quasha also received a Guggenheim Fellowship for his video project Art Is: Speaking Portraits, a series of short statements by almost 500 artists, poets, and composers from seven countries and in 17 languages.

Quasha came upon his axial art by chance, walking with his wife Susan and the poet Chie Hasegawa, examining stones and heavy boulders along the pathway from the waterfalls at Bash Bish Falls in the Berkshires. But he had a lifetime of artistic and spiritual preparation to be able to recognize what he was seeing. “For an artist to enter into ‘the state of the axial,’ she or he must be willing to be somehow ‘rediscovered’—or to be in such a state of flexibility that continuous change becomes normative.” Elsewhere, he compared the balancing aspect of the work “with the relaxed alertness and dynamic alignment in the practice of t’ai chi chuan, which I had already been studying for some two decades.”

The concepts Quasha uses to describe his axial art can sometimes be tedious and awkward: he favors phrases like “elemental opening,” “tortional syntax,” and “performative indicative.” Yet, his search for a poetic language to capture the seemingly simple act of placing one stone upon another in an implausible yet necessary way has its own kind of revelation. “The stones mostly originate along riverbanks, in streams, and around waterfalls. In what we call their ‘natural state’—meaning their ordinary condition—they are nondescript, unremarked. Something occurs to displace the inattention that is their condition. One looks directly at them, creating a new axis of attention. Now they are moving in the mind of the observer, turning and becoming attractors. The stones come into relation.”

Quasha teaches us that in the axial state of open perception, things are never just one kind of thing. As with people, whenever you think you know something definite, you soon see it changed, perhaps within the space of a thought. “Stones are only visiting us,” he writes in one of the many poems in his book, “here in the realm of perception. / They have a time / deeper than time. / They sing / quiet. They hold / space open / for shadows / and tilt the continuity / of the empty view.”