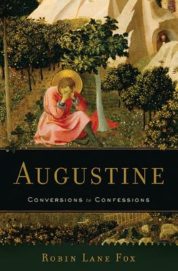 Robin Lane Fox’s Augustine: Conversions to Confessions is an informative, highly scholarly, and, at 657 pages, voluminous study of the great Christian thinker of the third century AD. But it is also a history of Augustine’s times, concentrating almost equally on what Fox describes as a “triptych”—like those on a medieval Christian altar—which includes Augustine’s younger Greek-speaking contemporary Synesius (a Christian bishop and philosopher) and Libanius, a pagan born years earlier but devoted, like Augustine, to oratory.

As Fox makes clear, both Synesius and Augustine left us versions of the “confessional” genre, a tradition that perhaps grew out of Petronius’ bawdy Satyricon, while Libanius composed in the form of complex philosophical hymns. Learning how their contributions to their chosen genres differed and how their philosophical views varied helps to reveal Augustine’s immense importance and explains his continued influence—even if within his own lifetime he did not see his work widely read.

Fox also permits us to comprehend just how important the North African Christian communities were to the early development of Christianity, before the later Arab conquering of the region. Perhaps, most importantly, the author brilliantly details Augustine’s slow transformative conversion, expressed in the Confessions as “what I once was” and “what I am now.”

Augustine was born in the small town of Thagaste in what is now modern Algeria, where he was baptized by his mother Monnica as a Christian. He became attracted to the theories of Mani, the Iranian prophet who argued for a vision of the world as existing in a condition of equally powerful forces for good and evil, symbolized by the light and the dark. Although many of their values shared much with Christianity, the Manicheans did not believe in the divine birth, and their dualities of dark and light gave more emphasis to the evil in the human soul than did Christianity. Moreover, in the East, in particular, the Manicheans also adopted aspects of Buddhism, Zoroastricism, and Indian Hindu and other traditions. And its believers rejected the biblical psalms and the entire Acts of the Apostles (later to become some of the most important texts for Augustine) because of the idea that the “Holy Spirit” had been bestowed upon Christians at Pentecost.

Fox does not fully explore how the Manichean tradition of personal confession influenced Augustine’s own Confessions. What Fox does show us is how Mani’s beliefs, Cicero’s writings, and Platonism all fed Augustine’s gradual movement toward Christianity. Perhaps just as important was his mother’s determination to see her son’s conversion to Catholicism, as well as Augustine’s own struggles against his human lust. The man clearly loved sex before his retreat “into the Garden,” where he determined to “let it be done now,” fell back, and fought with himself and God in giving up sexual acts, finally recognizing that it was Adam’s sin that was behind all human failings: “Grant me chastity and continence,” he prays to God, “but not yet.”

The rest of the story reads almost like a soap opera, as Augustine moves from oratory to philosophy and Christian thinking, is influenced by Ambrose and other great churchmen, begins writing, and moves back to North Africa, where he is eventually raised into a position as co-bishop. Enemies claim sexual intrigues based on his former Manichean beliefs—the utterly flabbergasting tale of the supposedly Manichean activity of engaging in sexual activity on a floor sprinkled over with flour, after which, disengaging from sex at the very last moment, the male ejaculates into the flour, later baking it into a bread to be sent off to a would-be female lover, reads like something out of a porno thriller—but they help to make the great saint into a human figure who did not live a sheltered or totally sacred life, which is largely why we still read Augustine today.

And finally, of course, Fox’s book excites one to read or reread Augustine’s Confessions, one of the great texts of the centuries. Yes, it is an autobiography of sorts, but it is also, as Fox makes clear, a testimony of the self in abnegation of a sinful past and a kind of prayer for a more perfect future.