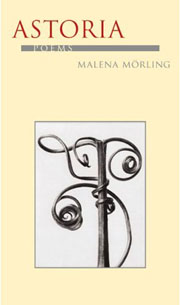 "No ideas but in things" William Carlos Williams famously wrote in 1944; Malena Mörling's work is a contemporary echo of Williams' philosophy of the localized image, one set in relation to theoretical physics and quantum theory. In Mörling's hands, the poetry of the local becomes a way to record, preserve, and witness experience at the quantum level, as it travels wavelike, radioed into space. Theoretical physics, which proposes that any imagined possibility will at some point in time be true, is the underlying framework of this book. Mörling's poems work on one level as artifact, investigating the images of daily sights and moments. As such, Astoria is the manual to this world's experience, traveling at the speed of light, or memory.

In the opening lines of her book, "If there is another world, / I think you can take a cab there," Mörling rejects otherworldliness, heaven, soul, or life-after-death, since these are ideas that cannot be explored by experience. In "131st Street" she writes more directly: "I have never wanted to visit / outer space— // Though I have often thought / about how it never ends." Just as the light we see in the night sky may be that of stars that no longer exist, Mörling's work considers our own light, the experience of this place in time, sent out into the universe to unnameable ends. We are, instead, beings who "continue / in the weightless seesaw of the light / through a few more intersections / where people inside their cars / pass you by in space / and where you pass by them." What is left of us is the evidence of our wearing our place in time. "What will we become?" she asks in "Becoming A Coat," "Besides coats, besides shoes / that will continue to walk / a while longer / upon the earth."

Mörling's language is deceptively accessible. She is a master of imagery and the pacing of her lines is ultimately subversive, lulling by their movement from the familiar paraphernalia of the physical realm into a joyful nihilism. In "Seeing High Above" the poet's belief in "things" is clearly pronounced. Seeing "a scrap of paper" floating in the "blustery library / of the air" the speaker immediately knows "it is a message— // A message / that there is no message." Again in "In the Yellow Head of a Tulip" Mörling offers a catalogue of found objects that feel amazing by their arrangement alone:

Place for Mörling is both inheritance and anchor. If there is nothingness— if there is only particle and atomic half-life on the other side of experience, then beauty is both an accident and a byproduct of the marriage of space and the absence of a greater purpose, greater meaning. But the reward of this work is that it insists that the image of this place at this time is itself wondrous. In this book, Mörling recounts one beautiful accident of experience after another:

It's amazing
we're not
more amazed.
The world
is here
but then it's gone
like a wave
traveling toward
other waves.

Mörling's work resists easy versions of belief that provide a safe way to speak about the human spirit, though her work succeeds in being joyful, and never despairs. Spiritualism amounts to playfulness in language, an awe for the connectedness of human experiences— themselves as free as the particles as of light, or breath.

In "No Precise Location" she writes, "Our bodies / are lying here now / on this bed / in the dark / of a house on the earth— / A house as much in space / as the farthest star / in the galaxy of Andromeda." Nihilism is never dark in Mörling's work, but demands that we consider this too-swift miracle of being. This world, and all the characters of experience who inhabit it, is the only thing we know for sure, and Mörling's poetry quietly considers it in the context of theoretical time, in which space is the dilemma of our wonder.