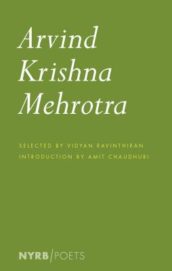 The premature deaths of Eunice De Souza in 2017 and Meena Alexander one year later have significantly thinned the ranks of anglophone Indian poetry, depriving the world of two major women writers whose birth dates straddled 1947, the watershed year of Indian independence. Born that same year, Arvind Krishna Mehrotra stands out as a poet from that generation whose work continues to find new publishing venues and engage new readers, both in India and abroad.

The latest and most prestigious of these is the NYRB Poets series, now thirty titles strong, which features authors from around the world and includes such names as Apollinaire, Dante, Osip Mandelstam, Henri Michaux, Silvina Ocampo, and Walt Whitman. Until Mehrotra joined these ranks, the only other Indian was A.K. Ramanujan (1929-93), whose contribution showcased his achievement as translator of classical Tamil poetry rather than as poet in his own right. Mehrotra has also appeared in the NYRB pantheon as a translator—in his case of the fifteenth-century bhakti poet Kabir, whose irreverent and provocative songs Mehrotra rejuvenated in a version that tops those of many illustrious predecessors (Robert Bly, Pound, and Tagore included). Indeed, for originality and inventiveness, the selection from Songs of Kabir (2011) outshines the other translations featured in the book under review, including versions from the first- and second-century Prākrit of The Absent Traveller (originally published in 1991), and from twentieth-century Hindi (Suryakant Tripathi “Nirala,” Vinod Kumar Shukla, Mangalesh Dabral), Bengali (Shakti Chattopadhyay), and Gujarati (Pavankumar Jain).

As Vidyan Ravinthiran explains in his editorial note, Arvind Krishna Mehrotra: Selected Poems and Translations draws from two previous volumes of Mehrotra’s collected poems, one published by Penguin (India) in 2014 and the other by Giramondo (Australia) in 2016. Compared with either of them, this book includes a substantial amount of new work, namely a translation, an elegy for Eunice De Souza, a poem inspired by the tragic death of the poet’s sister, and the sixty-page long sequence “Daughters of Jacob Bridge.” Overall, Ravinthiran’s scrupulous and discerning selection has produced a book that shows, more clearly than a collected edition, Mehrotra’s development and refinement over the past half-century.

Such a process begins in the late 1960s, with a style that is subtly affected by post-war Surrealism and protest poetry, influences that Ravinthiran’s inclusion of two uncollected poems from 1972-74 makes explicit. The second in particular, “Ballad of the Black Feringhee,” is reminiscent of Ginsberg’s “America” in the litany of blunt statements that the poet directs at his own country (“India I was born in the year of your independence,” “India where’s my horoscope,” etc.). By the time Mehrotra published his first collection, however, these influences had been tamed and woven into a richer tapestry, as the five poems from Nine Enclosures (1976) show clearly. The antiquarian extravaganza of “The Sale” reveals a penchant for enumeration, referencing, and cataloging that also emerges from “Songs of the Good Surrealist,” “Index of First Lines,” “Continuities,” and later poems. If we consider the descriptive and normative functions of lists, inventories, maps, and other instruments of colonial rule, Mehrotra’s use of the Surrealistic technique of incongruous and provocative juxtaposition (famously envisioned by Lautréamont as the “chance encounter of a sewing machine and an umbrella on a dissection table”) undermines and subverts the taxonomic order implied in these poems.

A similar subversive tendency, although supported by different means, characterizes Mehrotra’s descriptive and narrative poems (and most of Mehrotra’s poems are descriptive or narrative to a degree), where a punctilious, evocative visualization (“the air, dry and silvery / At the entrance, is moist and sea-green, furry / To the touch,” from “The Roys”) often leads to a destabilizing or unsettling close. In the most condensed example of this manner (“January,” from Mehrotra’s second collection, Distance in Statute Miles, 1982), a deft camerawork takes the reader from the exterior to the interior of a life in just four telegraphic lines:

In his best poems, Mehrotra proves to be a master storyteller with a peculiar taste for the uncanny; this is what makes his poetry a constant pleasure for the reader and an endless, delightful challenge for the critic. Images or impressions from the poet’s past or from his readings, kindled by close observation, often interact kaleidoscopically to convey the eerie impression of a life lived in the flesh as well as in the mind, of which the “house” and the “library” are apt and interchangeable representations. “We belong to the houses we live in” is the spectral, closing line of a poem that begins “Who remembers my dentist father / Now that even his patients are dead” (“Hoopoe”). And “Borges,” an invocation to the muse of all literary writers (“Insomnia brings lucidity, / And a borrowed voice sets the true one / Free”) ends not surprisingly with a call to “lead me . . . to the labyrinth of the earthly / Library.”

Similarly, “The House” invokes various literary landscapes (Grimms' fairy tales, Victorian murder mystery, the golden age of Hindi cinema, and modern psychological thrillers) to evoke—or dissimulate—a very personal memory. Employing the same visual technique featured in “January,” the poem progresses from an exterior view, a stone cottage in the middle of a forest, to an interior suggesting abandonment and decay. Here, however, the striking element is not the bats in the rafters, or their “dung on the floor,” but a dentist’s coat hanging from a nail and “smelling pleasantly / Of chloroform.” The reader has no sooner started asking some obvious questions (why would a dentist practice in the wilderness, and what makes the smell of chloroform pleasant?) than a different imagery raises new questions. Do the muddy sandals, the smoky eyes, and the dentist’s coat belong to the same man who, in the final couplet, “passes before me / In the cheval-glass”? An exquisite example of Empsonian ambiguity, the image combines the occurrence of a phenomenon and its phantasmagorical residue by means of the expression “passes before,” whose spatial and temporal meaning suggests, simultaneously, an apparition passing in front of the poet (i.e., between him and the mirror), and a father preceding his son through the looking-glass (and onto the otherworld).

This thorough and exhaustive selection may not gain Mehrotra’s poetry “a worldwide audience,” as its editor understandably hopes, but it has the potential for securing this major Indian poet an enthusiastic and devoted North American readership.