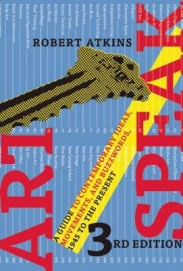 A Guide To Contemporary Ideas, Movements, and Buzzwords, 1945 To The Present
Robert Atkins
Abbeville Press ($24.95)

Many of us prefer trains to planes. And, maybe for the same reasons, many of us prefer flesh and blood reference books to cyber Wikipedia and Google. Arriving at one’s destination may take a bit longer, but the journey is more satisfying, the experience more human, and the results, frequently, more reliable. Consequently, ArtSpeak: A Guide To Contemporary Ideas, Movements, And Buzzwords, 1945 To The Present should find a berth on every home reference shelf, even if the art world is not one’s purview.

Robert Atkins’s third edition, the first of which appeared in 1987, is organized with a fact-based but cursive introduction that pinpoints “now” vs. “then” issues in the art world; a multi-layered cultural and political timeline that begins in 1945 and ends in 2012; and 146 alphabetized entries defining the “ideas, movements and buzzwords” of the period.

Atkins immediately points out that when ArtSpeak was first written “twenty-five years ago, the world was a different place.” He notes the Berlin Wall was still standing, China was advancing economically but not democratically and Tiananmen Square had not yet happened. Email was in limited use, and mobile phones were scarce. He notes differences in the art world as well, in particular its globalization. New York City had “only recently relinquished its mantle of the center of postwar art production, exhibition and sales. . . . This multi-centered—but indisputably Western—art world was the foundation of today’s international art system.”

Atkins also emphasizes that the new edition of ArtSpeak reflects this globalization by covering art production in China, Japan, and Brazil, and recognizes that art is now distributed via art fairs, biennials, and museums. He also posits that the language of art has changed with a “shift away from the division of art into short-lived styles or movements” such as Pop Art, Minimalism and Conceptualism. “The twenty-first century has seen the disappearance of art movements as the basis of a descriptive language of art." He also makes the critical point that 21st-century artists work in a variety of media and styles that “makes them primarily artists, rather than photographers or painters or video artists. . . . the artist’s signature style has in many cases been replaced by a signature thinking, invisible to the eye but apparent to the mind.”

According to Atkins, ArtSpeak’s goal is to decipher the complex meanings embedded in contemporary art and stimulate a knowledgeable appreciation of its production. He touches on how artmaking is a rigorous and demanding process involving “decision making and self-criticism.” And he wisely points out that artists do not make art only to make money but more importantly to “express them selves and to catalyze communication.” He also writes about how we now intersect with art. Moving beyond “modern industrial production to postmodern digital production,” the distribution of art is dominated by the international art fair circuit.

Following Atkins’s introduction and the timeline of significant world and art-world events from 1945 to 2012, the main body of the book “identifies and defines the terminology essential for understanding art made since World War II.” These entries are listed in alphabetical order and include art movements, art forms, critical terms and cultural phenomena. Most are divided into the hallmark journalistic categories of Who, When, Where, and What. In Who names in boldface type connote the leaders or “virtuosos” of that particular process, style, or event. When signifies the period of greatest activity; Where the cities, countries and continents of impact; and What explores the nature and implications of that style, movement or event. Abstract Expressionism and AIDS Art, Biennial and Black Arts Movement, Gutai and Mülheimer Freiheit, Neo-Concretism and Primitivism, and Semiotics and Transavantgarde are all there.

In the end, ArtSpeak is informative and readable, a friendly invitation to better understand the language of contemporary art. Over its history, the book has transmuted from more or less a dictionary of terms into a relatively comprehensive survey of twenty-five years of art. Now, don’t you want clearer understanding of the movement Mono-ha?