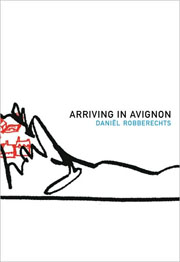 That’s how his Avignon is. A collection of streets that proceed at the speed of a pedestrian in a hurry, of boulevards that glide past at the speed of a bus; a town that revolves like a turntable with the increasing or decreasing speed of an arriving or departing train. . .

The 20th-century Flemish writer Daniël Robberechts knew what he was doing when he used the participial “arriving” in the title of this fascinating work: not only is his young protagonist constantly alighting in and around the southern French city without ever seeming to have actually arrived there—just as he is constantly attempting to make meaningful contact with the shifting objects of his youthful heart’s desiring—but the narrative built around this relentlessly indefinite state of affairs is equally, energetically tentative. So, if Arriving in Avignon is very far indeed from resembling run of the mill coming of age tales, it splendidly describes and embodies the quicksilver terrain between life recalled and life recounted.

Robberechts employs the third person to describe a young man who was or was not himself as he pays repeated almost visits to Avignon, a modest, handsome city most famous today for its jazz festival and a song about one of its bridges. He also frequently adopts the stance of an upfront, unreliable narrator—probably he thought or said or wondered something, but he can’t be sure; what he is describing happened years before and who can keep track of all the things that happened (not to mention are happening) in one’s head. Other times, Robberechts (or his narrative doppelgänger) steps in, using the first-person, precisely to set the record straight: “And now he can clarify: What I was longing for at the time, consciously but hopelessly, was an encounter with a Réa or a Hansi. . .” These moments of narrative intervention, which discuss events in the past tense, are all the more striking because the main body of the text—the young man’s encounter with Avignon and its inhabitants—is told in the present tense.

If all this sounds like the terrain of fiction, fiction of a jaunty, post-war experimental stripe, that’s because it is. It’s also not. Arriving in Avignon,first published in Flemish in 1970, is novel, memoir, guidebook, journal, bildungsroman, travelogue, and prose poem combined. Which is to say that Robberechts was Sebaldian before W. G. Sebald had published any of the boundary-blurring prose works that made him so famous. Still, given that comparisons to Sebald have become so common as to be almost meaningless, it might be more useful to evoke Baudelaire’s Spleen de Paris, that 19th-century collection of vaguely autobiographical prose sketches that circle around their central theme, or Dumitru Tsepeneag’s more recent Vain Art of the Fugue. Still, Arriving in Avignon is its own strange and gorgeously sprightly thing. Here’s hoping that as many readers as possible will discover it.