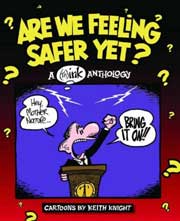 Pat Parker once wrote a poem called "For the white person who wants to know how to be my friend." It starts like this:

I'll be using Parker's Paradox to review Keith Knight's new anthology of (Th)ink cartoons, "Are We Feeling Safer Yet?" The first thing to do is forget that he's Black.

Knight's cartoons are single-panel snapshots of politics and current events. His adorable drawing style gives the impression that each cartoon is a window into a warm, happy world of harmless humor; instead he takes an unflinching look at war, torture, and poverty. There's a skillful negotiation at work here: Knight's wit and goofy style serve as pressure valves, releasing the tension that comes of tackling harsh material, but a topic like police brutality is also made more disturbing when the characters sport silly grins. The result is as painful as it is hysterical. Imagine Dick Cheney guest-starring on The Muppet Show, and you pretty much get the idea.

The Vice President gets a fair amount of abuse in (Th)ink, but the most recurring character is a tiny, grinning, giggling Dubya. He points at his television and laughs, delighted, when he wins the first democratic election in Iraq because we've lent them our voting machines. He hands drafting notices to homeless Vietnam vets, rides a tricycle, and shouts "Bring it on!" to Mother Nature during Hurricane Season. The wee character is so cute and clueless that you almost feel sorry for him. Almost.

To sum up: Keith Knight is an outstanding cartoonist, comedian, and political commentator. He's also Black, and don't ever forget it.

The main character of the K-Chronicles, Knight's semi-autobiographical comic strip, is Black. Most of the ordinary folk who walk through (Th)ink panels are Black. Most of the political issues in (Th)ink are of particular relevance to the African-American community, such as reparations, voter disenfranchisement, and the subtle difference between "finding" and "looting" groceries in a flooded New Orleans.

The comparison to Aaron McGruder's The Boondocks is inevitable; like Boondocks, (Th)ink takes shots at the flashy materialism of gangsta culture and booty-ogling on BET. The two comics also share slightly geekier material, referencing Star Wars and X-Men (my favorite has Malcolm X sporting Wolverine claws). But (Th)ink is no Boondocks knock-off. Knight's visual style and sense of humor are his own, and the nation is lucky to have him.