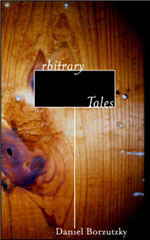 It’s hard to say just how “arbitrary” the tales in Daniel Borzutzky’s first collection really are—the title begs to be taken ironically, and the first piece, “The History of Rights,” obliges. In it, the characters, all “brutal ruffians,” rough one another up, chanting “My lord is a big, brutal ruffian and his Godmen are bigger than your Godmen.” It’s a parable about the relationship between human aggression, imperialism, and organized religion that reads like something Daniil Kharms might have written if he hadn’t had Stalin to worry about.

As soon as we adjust to the idea of reading a volume of clever allegories, however, we come across the first of two stories entitled “An Arbitrary Tale,” in which a “genetically engineered dark-haired golden girl” encounters “a green mMrtian with a dead squirrel around her neck.” From there the collection runs playfully amok, confronting ideology and the lack thereof, and appropriating, sometimes demolishing, received literary forms. In one story, William James “mowed the lawn each night wearing long pants, knee-high boots, a football helmet, and a pair of goggles”; in another, reminiscent of Gertrude Stein’s operas, a wax bust of Napoleon sings a litany of historical figures who “never meant shit to me”; and the final story, “Uncle Alberto in Exile,” crams as much narrative tension into 13 pages as you’re likely to find in some whole novels.

All of this experimentation might seem intimidating, or even tiresome, but Borzutzky’s prose is clean and often deadpan, and behind all of the calculation, there is a tenderness that allows one character to declare that he is “unable to deal with the pain of discovering that people hurt each other” and another to tell his lover “how nice it is to have someone to tell my stories to” without sentimentality—perhaps because the former is immediately snapped in the crotch and the latter subsequently renames God “Gork.”

“Arbitrary” indeed, then, though “Tales” is another issue altogether. The reader looking for an easy moral or a tidy denouement is likely to be disappointed by “Eight Unfinished Narratives,” not just because the narratives are incomplete, but because they’re juxtaposed in a list of 20 without indication of where one begins and another ends, leaving us to wonder whether Mother Earth’s etymology of the word “copulate” has anything to do with the man who “awoke one morning from uneasy dreams and found himself transformed into a cash register.”

There is one perspective, however, from which the term “tales” is undeniably appropriate — they’re nearly all told, as opposed to shown. And while there are times when the telling becomes tedious, as in “How We Celebrate the Arrival of Spring” and “War,” a pair of stories which document the quasi-religious civic celebrations of imaginary villages in such minute detail that they risk banality, it’s refreshing to see a young writer reject the first workshop commandment without fanfare and succeed so often.