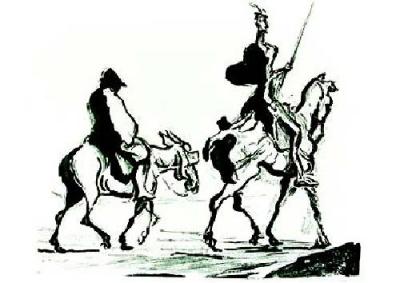 Don Quixote is an extraordinary contemporary story because it’s about the two pillars of modern life, love and books. To be precise, it’s about an impossibly romantic love and bad books. —Douglas Glover, The Enamoured Knight

Poor Alonzo Quijada meant to elevate himself into the legendary figure of a knight-errant. Instead, for all of literary history, Cervantes succeeded in doing just the opposite: he cast a legendary figure down: into the world of prose. —Milan Kundera, The Curtain: An Essay in Seven Parts

What is Don Quixote? Alberto Manguel calls it “a bewildering set of Chinese boxes.” Considering the infamous disasters surrounding writer and director Terry Gilliam’s first attempt at adapting Don Quixote, and the feature-length Lost In La Mancha (2002) documenting the “film that didn’t want to be made,” did it take failure for Gilliam before he could approach Don Quixote properly? Did he have to becomeQuixote before he could properly portray him?

The directors of the documentary, Keith Fulton and Louis Pepe, surmise as much in their online essay “A Curse of Mirrors,” in which they cite Cervantes’s own curse set in the final chapter of part two—as much a warning for future adaptors as for the author of the faux-Don Quixote novel published during the decade between Cervantes’s first and second half:

The nature of the curse appears to be this: those who attempt to adapt Quixote are doomed to become Quixote, to set out on their own impossible quests to turn fantasy into reality. Not so surprising as the evil brainchild of an author who had such a playful sense of self-reflexivity and mirroring, Cervantes’ Don Quixote is a book about books, a story about a character who becomes so caught up in fantasy novels that he attempts to enact them. The author holds up a mirror to make us see our own interaction with storytelling.

Not that the curse is fixed solely to the film, it would seem. In Miguel de Unamuno’s Our Lord Don Quixote: The Life of Don Quixote and Sancho with Related Essays (1967), the “Forward to the Third Edition [1925],” includes this curious apologia:

This edition—the third—of my Life of Don Quixote and Sancho, which forms part of my Complete Works, does not differ in any way from the second, in which numerous typographical errors, as well as errors in the original, were corrected; the latter were the offspring of my hasty improvisation, and had infested the first edition, published in 1905—twenty-three years ago now—which coincided by chance, and not by intention, with the celebration of the third centenary of the first publication ofDon Quixote.

“Fail again. Fail better.” wrote Samuel Beckett in his parody Worstward Ho. “All of old. Nothing else ever. Ever tried. Ever failed. No matter. Try again.” Does this apply to filmmakers as well? To attempt failure, is it antithetical to achieve? And yet, Fulton and Pepe, even while referencing the “curse,” don’t talk about the sheer amount of secondary Quixote pieces that have successfully made their curseless way into the world, including film, novels, dance. Does the curse really exist or is it just an unbalanced amount of bad luck?

Now that writer and director Terry Gilliam is working on The Man Who Killed Don Quixote, his second attempt at Cervantes’s infamous novel, the question comes up again, anticipating his new take on a literary landmark as culturally pervasive as it is under-read, a book almost as unknown as it is known. In an interview with Gilliam conducted by Sean O’Hagan in The Observer (February 4, 2001), the director replies to the still-fresh failure of his first attempt at adaptation:

“It’s funny,” he sighs, “but I always find that the process of making a film tends to echo the actual story and, in this case, I started to feel like Quixote, always tilting at windmills. The thing is, though, if I am being honest, there was a certain relief when it collapsed. For the first time in my life, I was starting a film and I didn’t feel joyful. There was about six hours of joy when me and Johnny were shooting together in the desert, getting ideas, inventing stuff. But, that was it. It just didn’t feel right. I was exhausted by all the other stuff. I guess I need that joy in order to work.”

Constructed from such expansive reference, the Quixotic anti-hero is littered across western culture, but Gillian has always preferred the underdog as well as the delusion that fuels him. In many of Gilliam’s best-known films, characters blur the line between the seeming contradictions of being in control and pathetically powerless. The lead figure in The Imaginarium of Doctor Parnassas (2009) is portrayed as both a destitute and faded street carny and a powerful, immortal mage. In The Fisher King (1991), a homeless man reenacts the search for the Holy Grail to cope with his suffering. And in Brazil (1985), Sam Lowry is caught in a convoluted, bureaucratic misery, working desperately to correct an error that could cost someone their life; as he gets caught up further in the mess, he retreats into fantasies of his unrequited love. Is he trapped in prison or flying free on metal angel wings? Which reality is real, and what to dreams make out of us? These are stories based on perception and storytelling, not reality. Does it matter which version is true? The brilliance of Gilliam is that both are, when required.

In A Reading Diary, Alberto Manguel quotes Lionel Trilling: “All of prose fiction is a variation on the theme of Don Quixote.” Manguel goes on to write that:

Most writers possess a historical presence: not so Cervantes, who, in my memory, is less a real man than a character in Don Quixote. Goethe, Melville, Jane Austen, Dickens, Nabokov are more or less recognizable writers of flesh and blood; Cervantes seems to me invoked by his book.

Is Gilliam, in turn, becoming his own invention of the infamous character? There is so much to Cervantes’s novel, that how does one boil any of it down? Screenplays from novels far less complex thanDon Quixote are forced to edit, cut, and streamline for the sake of adaptation from page to screen. What is the essence of Quixote’s tale, and will Gilliam find it? According to some sources, Gilliam’s screenplay includes his everyman, said to be inspired by Mark Twain’s A Connecticut Yankee in King Arthur’s Court(1889), a contemporary Londoner who keeps shifting between the present and Quixote’s Iberian Peninsula. With Ewan McGregor replacing the role previously held by Johnny Depp, many will flock to the film no matter how it’s structured (a list of other actors once attached to the project include Vanessa Paradis, Miranda Richardson, Christopher Eccleston, Jonathan Pryce and Ian Holm).

Don Quixote is, in the end, about perception. What happens to Quixote from one scene to the next, with a barber’s bowl for a helmet, or mistaking an inn for a castle? Is this character heroic, pathetic, or simply delusional, the victim of his own illness? Modern psychologists would have a field day with the man (were he contemporary and non-fictional), and the heavily medicated Alonzo could end up muted or somewhat socialized, living somewhere in a group home, cared for by the state.

Perhaps it’s a matter of letting go, in ways that other texts don’t require, and wouldn’t dream to ask. Perhaps it’s a matter of the novel’s sheer complexity, mass, and mutability that make adaptation so slippery. Will Gilliam’s Quixote finally become realized? One can only wish his second stab at this masterwork the best kind of failure.