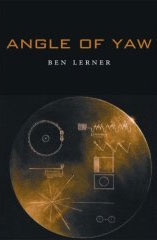 The critic Jed Rasula offers a seminar on the Kafkaesque, focusing on the appropriation of Kafka as a trope of contemporary literature. The time may now be ripe for a course on the “Benjaminesque.” One can’t trudge three feet through a thick layer of contemporary poetry without tripping over the Angel of History like a cement doorstop. Recent collections have offered us Benjamin-as-costume (cf. Joshua Clover’s author photo on Totality for the Kids) and as puppet-protagonist (“Walter B.” in the work of Sabrina Orah Mark). The ideal literary godfather, he is an always-generous epigrapher.

The title sequence of Ben Lerner’s second volume, Angle of Yaw, inhabits Benjamin from the inside out, adopting sentence structures, themes, and even motifs from his more aphoristic texts such as One Way Street—which, yes, provides an epigraph for this book. Yet Lerner’s second epigraph is from Hart Crane, which points to a competing leaning of Angle of Yaw—away from Benjaminesque parable-izing and into hypertrophic fancy. Repeating characters—Cyrus, the Baron, Hamsun (the junior senator from Wisconsin), and even the happily named Lerner—interrupt the text at its most aphoristic moment and convert it to a kind of prose poetry, or even micro-fiction:

to build the world’s biggest mirror, to outdate the moon, to dream en masse, to sleepmarch, to watch earthrise from the anonymous depths of our diamond helmets, screams Hamsun, and the general will fall to the earth as highly stylized debris. For all that remains of the public are its enemies, whose image will not be returned, so let them eat astronaut ice cream, from which we have abstracted ice, let them read magazine verse in the waiting rooms of plastic surgeons commissioned to implant breasts into their brains. To pave the horizon with silver nitrate, to simulate the nation through reflected light, to watch over ourselves in our sleep, to experience mediacy immediately, screams Hamsun, raising his glass, by waking into a single dream, THE STATE.

What is “screams Hamsun” doing in and to this poem? Both times, grammar breaks down after the insertion of this phrase, obscuring what hypothesis is being proposed. Hamsun draws a fictive frame around the whole, suggesting that we perceive this poem not as a thought-problem but as pastiche, aphoristic tone and diction gone amok and shooting off Edsonesque sparks of absurdity, clause by wordy clause. By the time the parallel structure of the infinitives returns in the final sentence, it too seems like one more bit of style, gleefully rendered by Lerner-cum-Hamsun.

Certain strong flavors are thus mixed with Benjamin in this book—a touch of Edson and Tate here, a helping of Ben Marcus’s flattened tone and estranged allegories of cause and effect there. But the pleasure of this pastiche is distinctive to Lerner, as are certain fruitful motifs such as the astronauts, who in this volume represent not cultural heroes but maimed and voiceless victims of our tautological struggle for vantage. The quirky persistence with which Lerner pursues this theme lends a cumulative resonance to his many pungent images and satisfying turns of phrase, even if his style at times seems designed to disavow the book’s potential philosophical heft.