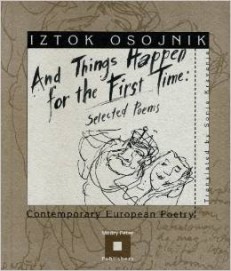 IIztok Osojnik, who lives and writes in Ljubljana, Slovenia, has published more than 16 collections of poetry, many of which have been translated from Slovenian into English. Perhaps the most widely read of those is Postcards for Darjia, which received the Slovenian National Poetry Book Award.

Reading the poems collected in And Things Happen for the First Time, it is easy to see why Osojnik has received such acclaim. Imagistic, with subtle humor, the poems develop a direct vision of life's ironies, paradoxes, and contradictions.

Osojnik juxtaposes myth and the modesty of everyday life to create an effect that is akin to bathos, but only in the positive sense of the term. The sudden deflation of expectation, the puncturing of a myth, are all necessary in order to see reality, suggests Osojnik, and he is no fan of art used in the service of lies, cant, and moral suasion. In "The Hysterical Woman," Osojnik renders a snapshot of a woman existentially caught in a moment of horror. We are not allowed to see what is causing the horror—simply that she has witnessed too much and has become trapped in an emotional dynamic equivalent to Edvard Munch's The Scream. If one hopes for rescue from angels or entities on high, there is no such hope held out: "There are no giants here. Just a village commons. / Cash and carry. And silence." The silence of the village is evocative of villages purged by Serbs. The silence makes the scream all the more heart-rending.

Osojnik deals with genocide in blunt, uncompromising terms as in "Damnation to the Murderous Serbs," where evil becomes its own organism, with a heart, aorta, and circulatory system. This metaphor is frightening in its brilliance; it perfectly communicates the exigencies of evil, and why extirpating evil often means plucking the very heart from the body, resulting in certain death to the entire organism.

Other poems address the poet's quest for vision and spiritual unity, but in a way that acknowledges that an overblown sense of self is the quickest route to blindness. In "Dead Poet's Society," the narrator climbs Parnassus "wearing only Adidas / and shorts" and, thus garbed, is able to find the paths carved by the ancients. Humility leads to enlightenment here, and following his solitary sojourn, the narrator "return[s] to the valley. Pensive. Wind-blown. Emotional. / Daydreamed about you. Just like a classical / Greek hero. I watched the mountaintop. Sang softly."

The other poems in the collection are characterized by the same level of simplicity of spirit, honesty of intent. It is a lovely collection, accompanied by sketches that reinforce the simple, direct lines, the purity of feelings.