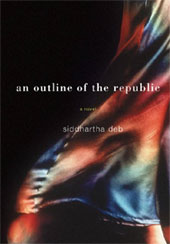 The Republic of India is often imagined in the shape of a diamond, with Kashmir and Kerala marking the north and south, and Bombay and Calcutta defining the western and eastern regions respectively. Such a map, however, would be incomplete; north of Calcutta lies a fragile strip of land (no more than twenty miles wide) that connects the Indian ‘mainland’ to the seven hill states of the north-east. Bounded by Burma, China, Bhutan, and Bangladesh, these states form one of the least-explored regions of the world, and are the setting and subject of Siddhartha Deb’s An Outline of the Republic.

Amrit Singh is a Delhi-educated journalist who works for a sleepy Calcutta newspaper named (inappropriately enough) the Sentinel. Going through the newspaper files, he chances upon a photograph of a young woman being held at gunpoint by two masked men. A note states that the woman is a porn actress killed by a north-eastern rebel group named MORLS, as a warning to those engaging in “corrupt activities.” Posted to the region on a routine assignment for the Sentinel, Amrit decides to privately investigate the photograph, partly out of curiosity and partly because a German acquaintance hints that his magazine in Tubingen will pay well for an article on the picture. The story, Amrit is instructed, must portray “the mystery and sorrow of India through the story of the woman in the photograph.”

North-eastern India, the reader learns, is rich in oil; the locals, however, have not benefited from the oil wells constructed by the Delhi government. Rebel groups are hence numerous, and have long been fomenting minor trouble, so as to convey their frustration and resentment to the central government. Deb introduces into this real-life scenario the rebel group MORLS (Movement Organized to Resuscitate the Liberation Struggle), which casts itself as a guardian of morality. MORLS’s activities include ordering women to dress modestly, forcing prostitutes to give up their trade, and threatening drug users with violence unless they kick the habit.

An isolated event in a remote location is thus revealed to be no less than a microcosm of the global conflicts of our age. Boundaries and borders—both physical and imagined—are fragile; nothing is one-sided in this novel. The German magazine is guilty of desiring to reduce India to a snappy sound bite, but Amrit Singh, in search of an easy-to-market story that might grant him financial freedom, is no less culpable. The Delhi government may have suffered under the rule of imperial Britain not long ago, but it is now quite content to take advantage of a far-away people in a faraway place.

As Amrit travels to the state of Manipur, and then across the border to Burma in search of his story, reality and illusion begin to blur. The woman in the photograph might not have been a porn actress. She might not be dead. The photograph might have been staged, either by the Indian government to discredit the rebels, or by the rebels themselves, as a warning to the local population. As Amrit goes deep into the region, the difference between the center and the periphery too becomes shadowy—Delhi is no longer the locus, but an unreal and increasingly irrelevant place.

Shades of Heart of Darkness indeed; in fact, An Outline of the Republic is prefaced by a quotation from Conrad “Do you see the story? Do you see anything?” Amrit is always searching for an objective truth, the real story under the layers of narrative, and the novel never veers from the viewpoint of a dispassionate observer.

This self-consciously journalistic tone, however, sometimes leads to the prose taking on an “explaining” note. Manipur is described as having “the highest rate of educated unemployment in the region, rampant drug use, promiscuity, AIDS, and regular violence with government forces as well as ethnic clashes.” Describing the diversity of passengers on a bus, Deb writes that it “felt like a microcosm of the region, indeed of the nation.” At its best, however, the novel is a clear-eyed declaration that nothing less than the truth should do—however complicated and elusive that truth might be. A subtle exploration of identity and conflict, without a whiff of exoticism, An Outline of the Republic is a timely addition not just to writings on India, but to the literature of the peripheries of the world, making the reader question whether ‘far-away’ is perhaps closer than previously imagined.