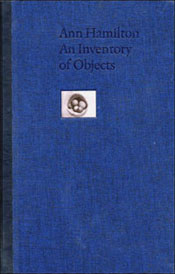 Ann Hamilton: An Inventory of Objects is the physical and aesthetic embodiment of its very subject matter. Alluring in both form and content, the book investigates, with a careful eye to detail, the nearly two decades of object-making by Hamilton, who is recognized more widely for her site-responsive and often temporary installations. Editor Joan Simon, who is based in Paris, is curator-at-large for the Whitney Museum of American Art and also the author of Ann Hamilton(Abrams, 2002). Friends and colleagues, Simon and Hamilton have sustained a conversation about her work for more than twenty years. It was during this conversation that both writer and artist realized the significance of Hamilton’s objects whether they are integral to or independent of an installation.

Simon provides an in-depth, historical context for Hamilton’s oeuvre, rooting it variously in 20th-century practices, including Dada and Surrealist interventions that physically redefined architectural spaces, Kurt Schwitters’ ongoing autobiographical Merz interventions, the happenings, assemblages and performative events of the 1960s, and the 1970s projects of Los Angeles’ Womanhouse. The author also highlights Hamilton’s early ambitions to be a textile artist and the significance of this discipline to her later work. In addressing Hamilton’s work, Simon underscores the importance of abstract or elusive elements such as time, memory, sound, intangible cultural voices, innate cultural knowledge and spoken and written language to Hamilton’s conceptual practice. She also notes the impact of poetry, specifically that of Susan Stewart, and how it is integral to the artist’s work.

The book takes special care to illuminate the artist’s ongoing attempts to give concrete form to the relationship between a physical act or “gesture” and an object. Layered on top of these investigations is Hamilton’s desire to make resonate the relationship of the body, or “figure,” to a particular installation. Simon also makes clear the underlying symbolic and metaphorical power of Hamilton’s choice of idiosyncratic materials, from organza to red vinyl powder to human teeth. Within this context, Simon proffers that Hamilton’s objects are critical to her conceptually and materially complex installations, although they are less well known and understood. Whether sculpture, found objects, books, photographs or video and audio works, Hamilton’s objects are either a profound linkage between her ideas and installations, or function as an extension—another generation—of the artist’s ideas, while evolving into related but independent works of art. In this sense, the “objects might step outside the time and context of one of her installations.”

Simon also sheds light on Hamilton’s decision to call this investigation of her objects and the resulting book an inventory rather than a catalogue or, more specifically, a catalogue raisonné. The Oxford English Dictionary defines the word inventory, among other meanings, as the “act or process of making an inventory, or the period of time when this is done,” “a stocktaking.” For Hamilton and Simon, the wordinventory connotes this book and the overwhelming research required for its making. The word encompasses the notions of time, process, and collecting of data, in addition to the actual objects themselves, all so critical to Hamilton’s practice. “This inventory means not closing the book in summary form but opening the book to go forward beyond the here and now,” states Hamilton. The author notes that this book could serve as a catalogue for future exhibitions.

The book itself deserves detailed description, as all of Hamilton’s objects do. Tactile, materially rich, and sparing no detail, its design by Hans Cogne is restrained and elegant, suggesting in size a classic tome on one’s private library shelf. Hamilton collaborated with Cogne on the book included in the 2004 installation aloud, and both artist and designer consider this book one of Hamilton’s objects. Its midnight blue cloth cover is finished with a black leather spine, and its pages are of a heavy pale cream paper printed with a serif font. The cover, spine, and midnight blue endpapers are embossed with the title, and, because of the darkness of the ground, the text comes into focus slowly. Illustrating the book is a lavish number of color and black-and-white photographs, and the luminosity of these images counter the book’s dark, mysterious shell. Further emphasizing the gesture of the hand and the element of time is a small, black-and-white photograph applied to the front cover. Selected from one of Hamilton’s projects, aleph, it is an image of Hamilton’s mouth with stone marbles rolling around inside of it.

The book’s somewhat unorthodox organization is also worth noting, in that it supports its status as an object in the artist’s oeuvre, and reveals, like one of Hamilton’s objects, its meaning incrementally. The book is divided into three main sections: the essay, the inventory, and reference information. Only at the end of the book does one find the contents page. Such design is significant for several reasons, reflecting issues central to Hamilton’s art-making. Not only is the organization here conceptually complex, like her installations, but the book in its construction amplifies the notion of “inventory.” It clearly reflects Hamilton’s love of sensual, often unorthodox materials, the sense of “making” an object, and the rigorous, formal concerns and attention to detail manifest in all of her work. Moreover, the book, both as a sculptural form and a container of information, is the most recurrent image in Hamilton’s body of work.

Ann Hamilton: An Inventory of Objects is an aesthetically sophisticated book whose materials and design corroborate the information it contains. Whether one is a supporter or not of Ann Hamilton’s work, the book has a place in anyone’s library who values the notion of a handcrafted book.