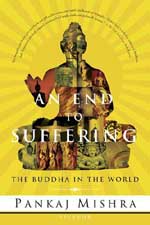 During a recent trip to India, on the flight back from New Delhi to the U.S., I was sitting next to an Indian gentleman, an engineering student in an American university. He came from the Indian state of Bihar. When I asked him, “Is there a famous person from Bihar who I may know of?” he paused for a moment and said: “Do you know the Buddha?” What a nice coincidence! I showed him Pankaj Mishra's book An End to Suffering: The Buddha in the World, which I had bought in New Delhi a few days before to read on the plane. The book includes a map of historical places relevant to the Buddha's life. We reviewed the map: Lumbini, where the Buddha was born as Siddhartha Gotama around 563 BC; Bodh Gaya, where he was enlightened at the age of 35; Sarnath, where he first preached the Buddha Dharma; and Kushinagara, where he died at the age of 80.

The story of the Buddha, a prince who left his palace to find the truth of life and death, has been (and will be) told numerous times, and many have fantasized of following “in the Buddha's footsteps.” And yet, fascination with the Buddha's life and geography remains powerful as ever. Pankaj Mishra has tried it for himself and the product is an illuminating book. Back in 1992, Mishra, then a new graduate in English literature from Delhi University, moved to a small Himalayan village in north India to read, observe, travel, and write about the Buddha. For the next couple of years, Mishra journeyed through books, places, and his own life in order to understand the Buddha's life and teachings.

What sets apart Mishra's book is that it recounts how a young intellectual brought up in a middle-class Hindu family in modern India rediscovers the Buddha—whose religion, although it originated in India, is more prominent in other Asian countries from Sri Lanka and Tibet to Korea and Japan. Mishra mentions the Hindu view of the Buddha as an incarnation of the Hindu god Vishnu, but is quick to add that the Daltis (a group of Himalayan Hindus converted to Buddhism to escape the cast restrictions in the Hindu religion) resent this view and that the Buddha himself did not claim it. Mishra then attempts to present a historical Buddha rooted in the Indian geography and extensively researched in modern times by Orientalists, explorers, philosophers, and monks.

Another interesting feature of Mishra's book is that it juxtaposes the Buddha Dharma (teachings) with modern thought, especially with that of the German philosopher Friedrich Nietzsche. Mishra has managed to weave together a story of the Buddha with implications for an age whose inhabitants are constantly dealing with stresses and nihilism in daily life and with the strife of consumerism, militarism and international conflicts, on a global scale. Mishra finds that the Buddha is as much a contemporary teacher as he was 2500 years ago.

In the end, Mishra does not convert to Buddhism (that is irrelevant for the Buddha), but what is significant is that he finds the Buddha's solution to end suffering to be very much valid and relevant for today: Awakening from our ignorance and delusions, and adopting a compassionate life in place of one with endless selfish desires.