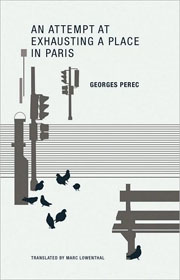 The city is where we are most together and apart together. In An Attempt at Exhausting a Place in Paris, the most banal objects or quotidian trajectories become marvelous moments of anonymous being. This is perhaps what Georges Perec and his fellow Oulipo practitioners inherited from the Surrealists—the belief in the resonant meanings of everyday language and life. The marvelous is found in the dynamic intersection of language and the material world, or the “hundreds of simultaneous actions, micro-events, each one of which necessitates postures, movements, specific expenditures of energy.” The initial clinical tone of the text soon makes way for the delectably poetic nature of An Attempt. By observing the intricate “fabric” of one urban intersection, Perec creates a strikingly beautiful poem out of the everyday, observed world.

The poetic potential of this particular experiment should be noted at the outset. Criticism of Oulipo, or the “Workshop of Potential Literature,” necessarily tends to focus on the scientific or “experimental” nature of the group. Perec himself is, after all, perhaps best known for A Void (La Disparition), a 300-page novel about disappearance written entirely without the letter “e” (or, alternatively, as author of the world’s longest palindrome). The end result of An Attempt suggests quite a dramatic kind of epiphanic potentiality imminent in all people, places, and things—and yet this somehow occurs in the humble, understated way of the everyday. Little haikus creep more than leap out of the text:

People stumble. Micro-accidents.
A 96 passes by. A 70 passes by.
It is twenty after one.

Here, Perec is ostensibly just listing everything he can observe, but it reads more like a profound insight into the nature of existence—people are micro-accidents, aren’t they? And, though Perec is merely noting the passing buses and time of day, their ritual and predictable trajectories make one think about how they reflect our banal and “infraordinary” lives. An elision of metaphysical boundaries also occurs between the humans and pigeons of the square: “The pigeons at my feet have a fixed stare. So do the people looking at them.” This observation sets up another nice haiku:

All the pigeons settle on the plaza.
The lights turn red (they do this often)
Scouts (same ones) pass by the church again

Perec chooses a decidedly local focus in both space and time for his experiment—the Place Saint-Sulpiceduring a weekend in October 1974—but in so doing he strikes a chord of universality in the urgent and ephemeral course and commerce of urban experience. He soon realizes his attempt to somehow exhaust this place by describing it is doomed to delightful failure; exhaustion implies a completion or mastery that both the place and writing resist. In his cogent afterword, translator Marc Lowenthal calls the project a “noble exercise in futility.” Nor does it seem that Perec ultimately cares to be objective about the objects he observes. One day he obsessively records the passing of buses, the next day he’s “lost all interest in them.” Are they the same buses? That is for you to decide. Meanwhile, this beautiful little tome of urban motion and “Ghostliness” from the past is truly haunting.