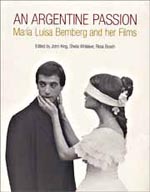 An Argentine Passion is a thorough and rewarding study of the life, politics, films, working relationships, and critical receptions of the highly successful and influential director, María Luisa Bemberg. It combines background into Argentine culture, history, and politics, highly detailed and poignant readings of Bemberg's films, and her own words. Its primary task lies in setting contexts from which to read Bemberg's cinema and the multiple levels on which it questions authoritarianism in Latin America and the world, both in the past and the present.

María Luisa Bemberg was born in 1922 to a family of significant wealth and international renown, and died in 1995. She married, had children, and later divorced. In 1970, at the age of 48, she worked as a screenwriter on her first film. Ten years later, she directed her first feature, a task which, as Gabriela Massuh asserts, "was like deciding to be a general at a late age when you have never been in the army."

Throughout her 11 films (as a screenwriter and/or director) María Luisa Bemberg's targets and motives have remained constant, even while her critical methods have been adapted to each particular subject. The address of her films attempts to counter the abuses of authority by the patriarchal triangle of family, church, and state in Argentine society. Her highly popular filmmaking has focused on institutional transgressions against women and the various ways in which women have transgressed the taboos and restrictions established by those institutions.

This book is edited by John King, author of Magical Reels: A History of Cinema in Latin America; Sheila Whitaker who first brought Bemberg's films to Britain; and the producer of The Buena Vista Social Club, Rosa Bosch. Here they have collected essays with a wide scope and pertinent detail, as well as personal reminiscences of those who worked closely with Bemberg, that teach much about this Argentine and her films. What comes through is how much she has touched and changed, intellectually and emotionally, everyone who has ever worked with her. As the assistant director Mercedes García Guevara writes, "I gave up trying to understand her. She was complex, unfathomable, sometimes adorable and sometimes disturbing. Approximations aside, María Luisa is sorely missed."

In her arguably most successful texts, Camila (1984), Miss Mary (1986), and Yo, la peor de todas (1990), Bemberg confronts the family and the church in regard to the feminine and female desire, dissidence, and scandal. Through purely filmic narrative, she intervenes in these issues in a way that demands the medium itself be fully explored. Framing and camera distance are always linked. Camera angle and editing (linear and non-linear) make it almost impossible to translate her work from film to another presentation. This alone has been seen as one of her true strengths. As well, her character development—from the aristocratic Camila O'Gorman, executed for seducing and running away with a priest, to the transgressive nun Sor Juana, Mexico's most celebrated colonial poet and thinker, who writes her confession in her own blood in Yo—goes far beyond one-sided portrayals of issues of gender and individual freedom.

One of the major questions surrounding Bemberg's work is the very nature of her overt feminism and the extent to which it functions in a reductive or Manichaen manner. Finely detailed, thorough, and at moments quite eloquent readings of Miss Mary, Yo, and De eso no se habla by Elia Geoffrey Kantaris, Denise Miller, and Kathleen Newman, respectively, support the point that her view was utterly complex. Bemberg's main characters are all women, but the filmic positioning and level of audience identification she allows with these leads are never simple. In Miss Mary, for example, Kantaris argues that we have a "subtly evoked metonymic web of interlocking power structures" rather than a simple opposition between men and women. And, in her reading of Yo, Miller pinpoints the very complexity between helplessness, abdication, denial, surrender, orchestration, and capitulation in response to love and knowledge brought out by the film. With these and other cases, this book goes a long way to argue against reductivist and binary understandings of this filmmaker.

These interpretations work as well to call attention to the relationship between Bemberg and the thought of Octavio Paz, Pedro Almodóvar, and Silvina Ocampo. Traces of Simone de Beauvoir and Betty Friedan are drawn out here. Comparisons are made to François Truffaut and Roman Polanski. Particularly interesting is Newman's political reading of Bemberg in comparison with directors Tomás Gutiérrez Alea and Juan Carlos Tabío from Cuba and Francisco Lombardi from Peru. She argues that while these four directors present differing versions of the permeability of the nation state in their films from the early to mid 1990's, all of them call into question the earlier equivalence between the state and the populace functioning as the norm in much New Latin American cinema. Such a reading, then, places Bemberg in a select category of directors who have refused to acquiesce in their challenges of abusive structures at any and all levels. Rather, as we see argued throughout this fine collection, Bemberg continued this very confrontation of the hegemony of the nation state as it comes into contact with global capitalism to the end of her life.