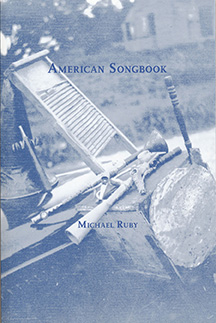 In American Songbook, Michael Ruby re-mixes the popular music of the twentieth century—blues, jazz, pop, rock, rap—with a poet’s eye and ear for sound- and word-play, pitching the reader, feet tapping and throat humming, through the American musical archive. Channeling Bessie Smith and Ma Rainey, Ella Fitzgerald and Louis Armstrong, Elvis Presley, Diana Ross, Janis Joplin and Lou Reed, among many others, he creates a field of playful experiment in which American musical culture meets poetic experiment and a collage-aesthetic of composition. Ruby’s remix, offering the reader a re-encounter with a playlist of seventy-six familiar songs, is both ambitious and spirited.

The noisy flotsam of human culture from ancient Greece to the late twentieth century enters this blues referentially, though what sustains the poem’s origins in the blues are not only the borrowed lines from the original song, but misery and oppression—“Meow the right bandit bargain / Scat you populous domination system / Black cats multitudinous and invisible”— the racial persecution that gave rise to this music born in the American Deep South.

Though most often working in the vein of improvisatory extension rather than compression, in some cases Ruby carves down the songs via erasure, the lyrical “meat” foregrounded in the poems. In re-working the Carter Family song “Keep On The Sunny Side,” the poet radically opens up the song’s lyrics, spilling his text across the white space of the pages. The remnant phrases from the titular chorus cycle down the page in stutters of hope rooted in despair, the possibility of “keep[ing] on” taking on ironic potency, paring back the spiritual uplift of the original. Ruby hints at the here-and-now sufferings for which promises of “by and by” are inadequate compensations:

Ruby principally reworks the songs using a process he has described as dropping a line into his subconscious and drawing up the language that returns to him via associative processes. The poems thus have their impetus not only in the American songbook but also in the tenets of Surrealist practice, the logics of the subconscious as revelatory source of poetic and artistic insight. The incongruous imbalance of power in Aretha Franklin’s “Ain’t No Way,” a woman’s cry to love and be loved by an indifferent and faithless lover more deserving of scorn than adoration, has its absurdity made manifest in Ruby’s careening imagery:

These poems are not the chart-topping hits of their origins, but attentively textured engagements with American culture (musical and otherwise), as well as with the emotional and nostalgic associations attached to these songs. In “Blue Skies,” dedicated to Maxine Sullivan, the effervescent hopefulness of the Irving Berlin song is satirically bent to address a whole catalog of cultural tropes including war, baseball, sausage makers, organ grinders, poverty, and the national debt. The fabled “blue skies” are cloudier in Ruby’s poem than those of the original, while the poem’s intrinsic rhythms, anaphora, and alliteration give it a song-like musicality that marks its origins as strongly as do the borrowed lines:

Drawing on readers’ memories of and associations with the songs, as improvisations the poems in American Songbook are dependent upon borrowed language. Ruby uses a variety of strategies in his adaptations of these songs, from excerpting and extending elements of a song or compressing the original via erasure, to having an emblematic line arrayed vertically to initiate the lines within each stanza. “Star-Spangled Banner (II) / For Jimi Hendrix” is an example of this latter technique. Much as Hendrix built his version upon the musical bones of the national anthem—introducing dissonant squeals, screeches, and guitar wails to voice not only the violence of the war described in the anthem and of the Vietnam War of the time, but also the violence of the nation against its ethnic “others”—so too Ruby’s poem satirically recomposes the lyrics of “Star-Spangled Banner” emphasizing the perversity of American jingoistic hubris and the economic (and otherwise) violence which is its cousin:

While such interventions against nostalgia give American Songbook compelling heft, the inventiveness Ruby brings to re-composing and presenting these songs is equally a pleasure, from the measured movement of tercets across the page mimicking the tempo of “Summertime / For Ella Fitzgerald and Louis Armstrong”—the tercets recapitulating the three beat rhythm of the song’s title—to the two-voiced call and response of “The Desert Blues / For Hattie Ellis,” to prose poems and lineated poems which align left or not, sprawling across the page in long prose-like lines, in dispersed spills across the page, or in interleaved columns. In poems such as “Something’s Got A Hold On Me / For Etta James” and “Stuck Inside of Mobile with the Memphis Blues Again / For Bob Dylan,” the space on the page mirrors the performers’ phrasings, the singers’ shifts and pauses marked in white space for the scanning eye. Reading these poems, I sometimes found myself longing for a soundtrack of the music underlying the poems: Etta James’ emphatic “I say ho, I say ho, I say hey hey.” At other times, reading for example “Trucking / For The Grateful Dead” or “Walk on the Wild Side / For Lou Reed,” the original songs were so present in my imagination that a soundtrack was superfluous:

Reading American Songbook conjures the image of the poet wearing headphones, letting the rhythms and lyrics of the songs drop down into his receptive mind and bubble back in altered form, extending, improvising, emphasizing what he has heard, much as the reader listens in to her own internal soundtrack.

Ruby’s collection draws to a close with the close of the century. Before the final poem, riffing on Santana’s “Smooth”—the final Hot 100 number one song of 1999— Ruby pairs two songs by Tupac Shakur with a song by Christopher Wallace (The Notorious B.I.G.). These two rappers were seminal figures in ’90’s rap, artists antagonistically staged against one another in an east coast/west coast rivalry that ultimately left both dead in drive-by shootings. Against the pathos of the blues songs that opened the century and American Songbook, Ruby turns at the end of the century to the collateral violence welling out of the poverty and despair that pulls apart the communities of which Tupac and Biggie rapped, illustrating the enduring distress in communities of color fifty years after the passage of the Civil Rights Act:

Re-representing the twentieth century through the lens of seventy-six popular songs—the number echoing the date of the nation’s founding—Michael Ruby’s American Songbook invokes the poetic counterpart of musical improvisation, tuning our ears to the narratives of popular culture through which we have so often understood and defined ourselves. Marrying musical nostalgia, language play, and satire, American Songbook also returns to us the freight of American cultural mishap and failure for which this music served as soundtrack. Ruby’s re-mix of the American musical canon offers an unaffected homage to its beloved sources while riffing on and opening up those iconic songs in a richly inventive series of experiments with the intersections of poem and song.