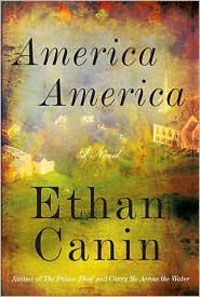 Judging by the fiction its famed Writers’ Workshop faculty produces, living in Iowa must be a lot like driving at night with no decent radio station in range: there’s not much to do, so you just mull over things. Take Ethan Canin’s new novel, America America. The novel is marinated in history, boiled in politics, and spiced with a sprig of murder: a recipe, it would seem, for lackluster melodrama. But instead, Canin offers a compelling story in the Iowa style—reading this novel is like sitting down with an articulate old timer and listening to him talk until the pot of coffee runs out.

Our narrator in America America is Corey Sifter, an elderly newspaperman. He’s a pensive man raised on hard work and honesty, and from the first sentence, you know that you can trust him—there are no syntactic pyrotechnics or literary cat-and-mouse games to be found in this novel. Corey tells a straight story, even though it may be a complicated one.

At age sixteen, Corey went to work as a groundskeeper at the Metarey’s elegant estate. For reasons he can’t determine, the patriarch, Liam Metarey, took a personal interest in him: he paid for Corey’s education, and when he decided to fund Senator Bonwiller’s 1972 presidential campaign, Corey landed a minor role as the Senator’s driver. In this way, Canin ushers us backstage to watch the machinery of politics, and the picture he paints is quite convincing. Most of the novel presents Corey distilling his memory, trying to understand his own involvement (and culpability) in Bonwiller’s presidential campaign.

As Senator Bonwiller begins to peak in the national polls, a damning article hits the street; the article touches on a frozen mistress and a crashed Cadillac, recalling the real-life Senator Kennedy’s Chappaquiddick tumble. But instead of handing the reader that luxurious, black and white morality, Canin leaves us wrestling with a complicated character: a good man who may have made a mistake.

That Canin forces his readers to ponder what they’ve read is the strength of America America. Unfortunately, the minor characters and the women in this novel are like decorative plates; none of them have their own volition. The eccentric alcoholic, the nihilistic reporter, and the apple-pie homemaker all remain stock characters on the operating table, waiting for the defibrillator.

One scene is particularly telling. During an exclusive party, Christian Metarey, the younger of the Metarey daughters, drags her yard-boy/boyfriend, Corey, into a barn. No, not to neck—to watch her father agree to fund the Bonwiller campaign. It’s a fun scene, but it’s obvious that Christian is merely a plot device here. And to make matters worse, after the big moment has passed, Christian murmurs “I can’t believe we saw that together“ and “presses her tongue between [Corey’s] teeth.” Since when did politics turn on teenage girls?

Still, America America is far and beyond the most ambitious book Canin has written. Weighing in at 480 pages, it’s about the big themes of politics, progress, and morality, but it doesn’t pander to any demographic. The characters aren’t quite well rounded enough to please readers of Proust, and there certainly isn’t enough throat slitting, warhead thieving, or disrobing to grab the thriller fan base. There’s both heavy-handed foreshadowing and ambiguous plot points, and cell phones pop up amidst the old-fashioned prose. Canin walks that wobbly tightrope between popular fiction and literature, and even if you don’t like the routine, you have to admire his bravado.

America America is, therefore, not a great book, but it is certainly a good one. For fans of Canin, it’s a fun read. For those who have yet to stumble upon his gentle prose, however, Emperor of the Air or The Palace Thief will make better introductions—America America gives a feeble first handshake, and for a writer that has penned so many strong, engaging works, it sells his brilliance a tad short.