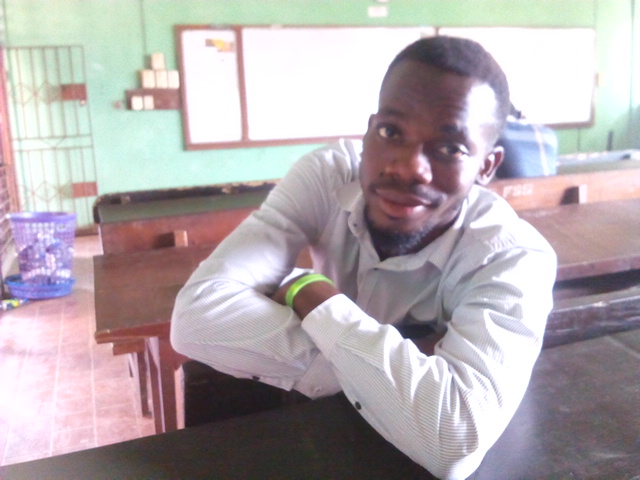 My uncle was happier that Saturday than other Saturdays, which were usually his happy days: they were the only days he never had to go to work or church; the only days he got to eat his favorite meal—pounded yam and egusi soup—all fashioned to the shape of his appetite with my grandmother’s fingers. But usually this happiness didn't manifest on his face: we usually only knew he was happy from his voice and actions. However, that particular Saturday I saw his cheeks dance to every word that fell off my mouth and I knew happiness could actually show on his face. Why was he happier than ever? A new sports show was to kick off that Saturday. Of course there had been sports shows aired on different TV and radio stations; my uncle was not happy because of that particular show, but because of the theme song that accompanied it: Peter Tosh's "You are An African."

Many years after that Saturday, the lyrics of this song would haunt me like guilt: “Don’t care where you come from, as long as you’re a black man, you’re an African." Throughout these many years, I thought about what it meant to be black, and what it meant to be African. The ultimate question was: Could blackness equate Africanness? This question bobbed in my heart for about a decade. When I came across Afrocentric scholars such as Frantz Fanon, Walter Rodney, and Léopold Sédar Senghor in the university, these philosophers would untie knotted thoughts in my heart with their voices. At the end of the class, the professor asked some fundamental questions: What would you call a white-skinned individual who is ingrained in African culture and shares the African beliefs and experience? On the other hand, what will you call a black person who has spent all his life in the West and knows nothing about Africa? The professor suggested that Africanness as a concept or as a way of living has more to do with the heart than the skin.

The first time the picture of Africanness as blackness ever came to my head was in high school reading the famous Sierra Leonean poet and novelist, Syl Cheney-Coker. My high school literature teacher’s thoughts were a thorough departure from what I would later learn from my socio-political philosophy class in the university. He concerned himself with the following lines of Cheney-Coker’s poem “Freetown”:

but all calling you mother womb of the earth
liking your image but hating our differences
because we have become the shame of your race
. . . . . . . . . . . . . . . . . .
and I think of my brothers with “black skin and white masks”
(I myself am one heh heh heh)
my sisters who plaster their skins with white cosmetics
to look whiter than the snows of Europe
but listen to the sufferings of our hearts

According to my literature teacher, these lines were directed toward Africans who used bleaching lotions and cosmetics in a bid to turn their skin to white, while at the same time still keeping faith with the belief in Africanness: the struggle for a better destiny for Africa and Africans. His explication of the poem yielded some pictures in my head, pictures of the people I knew who had bleached their skins but still professed their love for Africa, such as Michael Jackson. I had some such people around my house: their skin got lighter as their self-proclaimed Africanness got louder. My literature teacher disbanded the class with the question: How would you describe this group of people, patriotic Africans or not?

It's been many years since that literature class—so many years that I have grown to the point of articulating my own thoughts. Recently I decided to read the poem again and came to the conclusion that Coker was saying that yes, Africans who bleach their skins while professing their love for Africa are genuine. Africanness transcends the skin and goes deeply into the mind. But then there is another important motif heralded by Coker, which is that of Africans who fled the continent because of their disillusionment with the concept of Africanness—Africans who may return one day, when they realize what they have missed:

Meanwhile, this question continues to haunt me. Last year, a white man of Scottish origin named Guy Scott emerged as the new president of Zambia after his predecessor Michael Sata died, making him the first white leader of a democratically elected African government and the first since F. W. de Klerk in Apartheid South Africa. On the radio, two specialists in anthropological studies argued on why Scott is and isn't an African. I was alone in the room and I knew no one could hear or respond to my question, yet I kept screaming: If Scott isn't an African, am I an African? Am I? Am I?

D.M. Aderibigbe is a proud native of Nigeria. He graduates in 2014 with an undergraduate degree in History and Strategic Studies from the University of Lagos. His poetry appears in Poet Lore, Asheville Poetry Review, Hotel Amerika, RHINO, Grist, B O D Y, Vinyl and elsewhere.