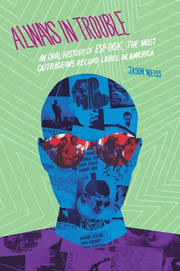 ESP-Disk was a short-lived record company that in some ways typified the independent and progressive spirit of the 1960s—with, as was most often the case, both its idealistic and its darker sides simultaneously present. ESP was begun by Bernard Stollman, a lawyer who in the early part of the decade had gotten involved with progressive music (he tried to act as Bud Powell’s manager for a time), volunteered for a time to help the legendary Moe Asch of Folkways Records, and was involved with the Esperanto movement. Esperanto, the manufactured “universal language,” in fact gave the label its name. “ESP” was short for Esperanto, and not, as most thought, a suggestion that the records were meant to operate on some higher, extra-sensory, plane.Always in Trouble tells us that Stollman’s first recording effort was Ni Kantu de Esperanto, which included poetry, comedy, and songs. The backs of ESP albums (immediately identifiable by their black and white covers) included notes in English and Esperanto, to encourage its spread.

Stollman began arranging recording sessions for artists who were having trouble getting contracts. His first jazz session became Albert Ayler’s Spiritual Unity, a milestone in the then just-awakening Free Jazz movement. This was recorded in July of 1964, but not released until the next year, after Stollman went to his parents and asked them to finance his idea for a record label. In September of 1965 ESP released a dozen albums simultaneously, making a bigger splash than they could have by releasing them singly: “It was a matter of critical mass,” Stollman told interviewer Jason Weiss. Along with the Ayler album, there were releases by Sun Ra, Pharoah Sanders, Bob James, and Ornette Coleman.

Stollman later expanded his interests to include such alt-primitive rock performers as the Fugs, the Godz, Pearls Before Swin, and The Holy Modal Rounders, even as he continued to record jazz players no one else would touch. There were one-offs such as a recorded issue of The East Village Other, with the participation of Allen Ginsberg, Tuli Kupferberg and the Velvet Underground (their first issued recording). Aesthetically, ESP was one of the ultimate flowerings of a certain hardscrabble “scene” of free jazz and hard core “hippie” attitude.

But there were problems too, primarily the familiar ones of broken promises and financial evasion. Jason Weiss, author of a book on jazz saxophonist Steve Lacy, and editor of a selection of writings by Brion Gysin, conducted the interviews with Stollman and as many of the recording artists as he could locate and who were willing to talk to him. The first section of the book, roughly a quarter of its length, comprises a series of interviews with Stollman where he talks about the label’s history, its demise (it closed down in 1974), and its almost unnoticed resumption of business thirty years later.

Stollman is intriguing, entertaining and perceptive when he talks about his involvement with the musicians, writers, and artists of the 1960s, but when the business side of ESP is discussed things get a little strange. In response to musicians’ claims that they found their records selling all over the U.S. and in Europe while they received no money, Stollman says that all the money went to the Mafia gangs who controlled the record-pressing plants and who would run off bootleg copies of the albums and ship them without his knowledge. Tom Rapp, of Pearls Before Swine, comments with rueful humor on this story in his interview:

My real sense is that [Stollman] was abducted by aliens, and when he was probed it erased his memory of where all the money was. I think that probably makes as much sense as the Mafia and the CIA.

The musicians interviewed here at times sound bitter about these financial irregularities, but more often say they are grateful for the fact that their work was recorded and made (if fitfully) available. Those Weiss interviewed include John Tchicai, Roscoe Mitchell, Gato Barbieri, and many more, and many of the stories they have to tell are fascinating, some heartbreaking. There are also a large number of old photos that are fascinating on their own. Unfortunately, where Stollman’s section is edited into a relatively cohesive narrative, no effort has been made to provide any kind of structure for the others’ interviews—they seem to have been simply laid in, catch as catch can. While the repetitions and digressions in these interviews will be valuable to those with an interest in a particular artist—I learned a few things about Ishmael Reed and Gunter Hampel that I hadn’t known—reading these from the beginning of the section to the end is a confusing experience, and many readers may just shrug and put the book down.

Oral histories come with their own set of characteristic problems that each editor has to deal with, a balance between the sources’ revealing comments and the axes they (and we) all have to grind. In this case it seems Weiss chose simply to let the cast talk and leave us to our own devices to sort it out. It may be best to view Always in Trouble as an important source book for those interested in the time period rather than as a successful book.