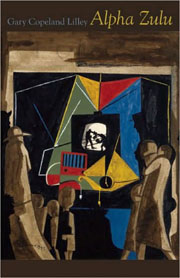 She’s a collection
of worn edges
until I push the blade
towards her heart. One hand
keeping God’s name
inside her mouth.
I look into her eyes
as she leaves.

As Kim Addonizio notes in her comments on the book, the section is “bone-cold,” the culmination of a poem that focuses on a serial killer and his prostitute victims. As the killer notes earlier in the poem, “It’s not a completely random thing, / the impersonal exactness / of the transaction / that buys every hole she has.” The serial killer adopts the justification of God, a point of view that these women deserve what they get.

Lilley deals with prostitution and pornography in a number of these poems, noting in “Porno” that “a bad woman is less faithful than the girl on screen.” But the poems as a whole deal with a variety of subjects, many having to do with the roles of African-American males within American society and Lilley’s work with the U.S. Navy Submarine Force. The poems discuss the blues, and one sequence uses the tarot deck to make its imagistic points. Most of the poems, though, are narratives about people’s transformative ability to fit in when they feel their choices are limited. As the author puts it at the end of the book, “the main rule of love is to not be dead.”

Lilley riffs on spending Veterans Day at “Rite Liquor Store and Bar,” discussing the value of one’s hopes and the fact that they do not cost anything. The reader need not know anything about the Tarot to interpret what Lilley wants to say through them, as in “Three of Cups Reversed”: “Beneath a ragged flag, the bare trees / in the departing winter, ashtrays half full, / fresh pack of cigarettes, and three cans of beer / sweating beside me on the table.” Lilley’s efforts fall down in some of the prose poems, especially the ones without punctuation, but he delivers powerful messages about the deliverance that a man demands from life, depicting the soul as a “sack of sand” and a funeral as “a fitful bed / along an obscene wall.” His verse brings beauty to the almost-failed world it creates.