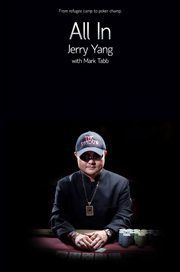 There will be no spoiler alerts in this review; Jerry Yang won the Main Event at the 2007 World Series of Poker. About half of his memoir All In is taken up with this competition, where in pedestrian prose, Yang and co-author Mark Tabb tell the familiar story of a not particularly strong player who follows a great run of cards to a championship. Luckily, however, that's only half the book. Interspersed with the Vegas tale is the far more interesting story of the young son of a Hmong leader forced to escape Laos and survive a Thai refugee camp en route to America. This story is harrowing and dramatic.

Despite the short shrift given to some of the most emotionally wrenching events (and the perhaps too numerous depictions of defecation), the Laos–Thailand–U.S. journey is must-read material. Even those somewhat familiar with the culture and tragic recent history of the Hmong population will find new details in All In: life as the child of sustenance farmers in the jungles of Southeast Asia, the cruelty of Ho Chi Minh's political descendants, the danger of trying to escape a repressive regime, the banal horrors of a refugee camp. Even the language works better here than at the card table, since we're viewing events through the eyes of a young boy.

There is a fair amount of proselytizing in the book—Yang is a devout Christian and he isn't afraid to let people know it—but this isn’t as bothersome as it sounds. His faith carried him through some of the darkest days imaginable, and unlike many of the hypocritical creatures we hear about in the news who use religion to justify bigotry, oppression, and a host of other crimes, Yang actually appears to act in a way that most Christians just profess: loving thy neighbor, turning the other cheek, doing unto others, etc. If you walk the walk, you're allowed to talk the talk.

In the end, readers of All In will find themselves rooting for Yang—he seems like a genuinely nice guy who survived an unbelievably hellish childhood to become not just a poker champion, but a psychologist and philanthropist. You can win a single tournament on luck alone, but to go from sustenance farming to head of your high school class and a master's degree—all in a language you didn't learn until you were over ten years old—requires an inconceivable amount of hard work. Furthermore, to hit a financial windfall you'd never have dreamed of as a child in Laos and then spend a great deal of it helping others shows, as the book's closing states, "the true mark of a champion."