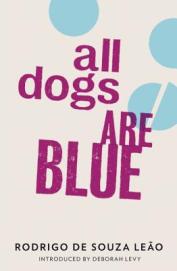 Brazilian writer Rodrigo de Souza Leão’s All Dogs Are Blue is like no other book in the world. That is not to say it is entirely original; its many literary and social references, including the author’s own re-summarization of the commonplaces (if you can describe them as such) of living in a lunatic asylum, harken to other great works in this subgenre. Although the author may not have read Ken Kesey’s One Flew Over the Cuckoo’s Nest or seen Anatole Litvak’s 1948 film The Snake Pit, these works, at moments, have a kinship with Souza Leão’s exuberant depiction of his life in hell.

Then again, this young author—who died at the age of 43, just as this book was published—may have known both of those works. For a man who spent so many years locked away in an asylum, his mind and body interminably altered by drugs, Souza Leão calls upon a huge body of international film, poetry, music, television, and popular events. Indeed, two major poets of the 19th century, Baudelaire and Rimbaud, regularly visit him in his cage in the little room to which he has been consigned in the favela-adjacent institution; with him are not only numerous other mad men and women, but criminals, and the elderly who have nowhere else to go. Although beautiful plants and trees surround his building, all day long his fellow prisoners cry out, bang their heads against the wall, and listen to loud television, while at night the endless music and screams of the slums washes over his troubled dreams:

Our hero’s entire world turns different colors depending upon which drug has just been injected into his veins: Benzetacil, Haldol (blue, like the color of his stuffed dog at home), and numerous other concoctions that force the patients to hallucinate and vegetate through what they have left of their lives. Part of the problem, the author lucidly argues, is that clinics mix up their types of patients, trying to medicate them as if they were all suffering from the same problems.

It’s little wonder that in such an interruptive world, Souza Leão has created a work that is not only raw in its vocabulary, filled with descriptions of and events that refer to bodily functions—spit, vomit, urine, shit, etc.—but linguistically lurches from association to association, radically moving from passages of description to narrative events past and present, and from the external to the internal in mid-sentence. “Real” visits from his mother and father are confused with his magical camaraderie with Rimbaud and his more casual friendship with Baudelaire. A discussion of electroshock therapy quickly grows into a serious consideration of why women are not allowed to cohabit with men; this in turn brings up the subject of sex, which the narrator associates with his own loneliness and ultimate sense of nothingness. The lunatics’ performances on a karaoke machine are quickly interrupted by the appearance of agents searching for the killer of the clinic’s former locked-away criminal, Fearsome Madman, who previously killed many people but was afraid of the narrator because he sounded like his father. Some associations function as a sort of psychological undercurrent, while others seem to come out of nowhere. Readers who seek coherence and an authorially controlled narrative will certainly be frustrated in reading All Dogs Are Blue. Stylists will find the work rough going, and logicians will quickly abandon it with despair.

Yet this short fiction, in its subtle and sometimes not-so-subtle repetitions of names, events, slang, and cultural experiences, in the end makes sense in a way that those whom we might describe as sane might never perceive:

Finally they gave me some glasses. But with the glasses I could only look inside people.

And there are moments when Souza Leão and his narrator philosophize in a manner that reaches near profundity:

Violence is so fascinating, and our lives, so normal. I’m talking about a specific kind of violence. Everything can be violent. Even God.

Clearly the narrator of this sometimes maddening work is mad throughout, but he recognizes that in that madness he can at least say what he wants. And in his recognition of his own madness, our hero recognizes his own condition in a way that few us do. He is aware not only that someday he will die, but just how he might die:

I take Haldol to be under no illusions that I’ll die mad one day, somewhere dirty, without any food. It’s the way every madman ends.

Rimbaud falls in love with him, contracts AIDS, and even asks the narrator to marry him, but Souza Leão’s persona doesn’t lose sight of his own reality: the fact that he, himself, is not gay. In the end, both Rimbaud and Baudelaire disappear, only to be replaced by other hallucinations of a vast supportive society of peace-loving Todogs, who, despite the narrator’s imprisonment, grow to include millions of members, altering the reality of the planet. Aren’t all such dreamers described as mad? Even if one’s dream and the whole of one’s past ends up in the rubbish like the narrator’s blue dog, it can always be restored through the imagination, no matter how troubled and sick it has become.

All Dogs Are Blue is no book for literary purists, but is a great read for anyone who can embrace the human spirit.