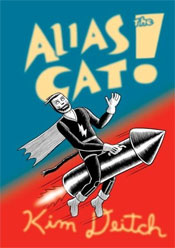 The term “graphic novel” has become ubiquitous over the last few years, but in many cases it’s a misnomer. The major graphic narratives of the last few years have been autobiographical. Even though graphic memoirs from Maus to Persepolis challenge both the traditional comics and narrative memoir forms, Kim Deitch injects postmodernism and cultural history into a relatively standard narrative to give us a Crumb and Pekar-esque cavalcade of post-psychedelic tall tales.

Deitch’s central character in Alias the Cat! is a fabricated version of himself, one so self-consciously over the top that it makes James Frey’s somewhat fictionalized memoir seem like C-Span coverage of a congressional policy debate. The book consists of three elaborate yarns spun by Deitch and a Citizen Kane-like menagerie of narrators, in which Deitch returns us to the more fanciful era of comix, where titles such as American Splendor, Fritz the Cat, and Mr. Natural filled the head shops.

In this, he isn’t breaking any ground—the likes of Montaigne, David Sedaris, and Hunter S. Thompson have all fabricated versions of themselves for the literary marketplace. Nevertheless, Deitch turns the memoir on its head, not simply by making up stories or relying on disingenuous forms with nebulous titles like “fictional autobiography.” Deitch positively revels in his own sheer preposterousness and his peccadilloes as both a cartoonist and collector.

In the first section, we are introduced to Deitch and his wife Pam while they’re exploring a flea market. They discover a man selling a plush black cat that has caught Pam’s fancy. The price is steep: a cool thousand dollars. The reason for this high price is the man’s history with the cat, a history that reads like the love child of a sea shanty and Joe Versus the Volcano. The stuffed cat becomes a central figure in the book—a case study in the id run amok.

In the second section, the cat manifests himself in Deitch’s discovery of a fascinating series of found texts (silent film serials, old newspaper comic strips, and reel-to-reel amateur oral history). Here we have more of the fifth-degree black-belt bullshitting, but there is a Spiegelmanesque level of self-referentiality concerning the medium of comics as well, one that offers subtle commentary on the ways in which the newspaper and movie business have not really changed in a hundred years.

Section three delivers a tour de force wrap-up, climax, and denouement that is every bit as miraculous in its ability to draw the far-flung edges of this book together as the best episodes of the Simpsons and Seinfeld. The absurdity doesn’t ease up; like a Frank Zappa guitar solo, it manages to attain new heights just as it seems to reach exhaustion.

Despite the beauty of much of the recent wave of graphic memoirs, there has been a seriousness that can be a little overwhelming. Alias the Cat is a welcome break—it won't make you think too hard, and it’s laugh-out-loud funny, a sheer joy from end sheet to end sheet.