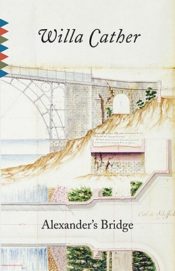 Perhaps the best short novels rely more on character than plot. Because of their brevity they will have a limited number of characters and settings, and time may be condensed or leaped. There is, too, a theatrical quality, with everyone appearing once more at the end for a final curtain call of sorts. Willa Cather’s Alexander’s Bridge, a short novel of ten brief chapters and an epilogue, fits this pattern snug as a glove.

Alexander’s Bridge has four main characters (Bartley Alexander, Winifred Alexander, Hilda Burgoyne, and Lucius Wilson), four minor characters (Mainhall, MacConnell, Horton, and Marie), and four locations (Boston, London, New York, and Morlock, Canada). The story has a tight time frame, but for the epilogue which occurs six years later in London, and even though the protagonist, Bartley, has been dead those half-dozen years, he is present as Professor Wilson describes to the actress Hilda Burgoyne his last visit to Boston and to Winifred Alexander’s house. Wilson says, “I found that I still loved to go to the house. It always seemed as if Bartley were there, somehow, and that at any moment one might hear his heavy tramp on the stairs. Do you know, I kept feeling he must be up in his study.”

Bartley makes his first appearance midway in the first chapter, and his entrance has the air of the stage about it. Cather writes: “When Alexander reached the library door, he switched on the lights and stood six feet and more in the archway, glowing with strength and cordiality and rugged, blond good looks.” Each of the ten chapters has the feel of a theatrical scene, and chapter six seems positively operatic: Bartley, in London now, has determined to end his affair with Hilda, but, alas, though he can build the finest bridges in the world, he cannot sever his mid-life crisis dalliance.

At forty-three, this famous engineer doubts his accomplishments; Morlock Bridge would be “the longest cantilever in existence. Yet it was to him the least satisfactory thing he had ever done.” On a work-related trip to London, he by chance comes across Hilda, his first flame as a young man and the woman he loved before having met Winifred. Craftily, Cather notes that when Bartley walks with Hilda, he actually strolls with “someone vastly dearer to him than she had ever been—his own young self.”

In her depiction of an identity crisis in the life of an affluent capitalist, Cather displaces any criticism of the world she knew. Throughout the tale, social problems or inequalities hover as if behind a scrim. Hilda employs “a very pretty and competent French servant who answered the door and brought in the tea.” On the last page Hilda confesses, as if to attest to or support Bartley’s appeal, “I can’t help being glad that there was something for him even in stupid and vulgar people. My little Marie worshipped him.” Some of these “vulgar and stupid people” cause problems for the brilliant engineer by going on strike, “delaying Alexander’s New Jersey bridge.” Of course, Bartley’s individual problems draw the reader’s attention away from the social ones that hover off to the sides. This is a work of human psychology rather than social realism—more Henry James than Stephen Crane.

Most of all, Cather’s sentences in this, her first work of fiction longer than a short story, startle and delight. Consider this description of a London cityscape: “There was a blurred rhythm in all the dull city noises—in the clatter of the cab horses and the rumbling of the busses, in the street calls, and in the undulating tramp, tramp of the crowd. It was like the deep vibration of some vast underground machinery, and like the muffled pulsations of millions of human hearts.” Cather next turned to writing about pioneer Nebraska, work that made her famous, but Alexander’s Bridge—a very succinct and urban novel—will always command a special place on my shelf of favorite works.