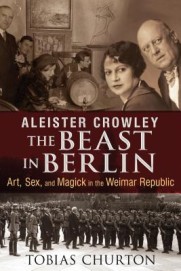 In this volume exploring Aleister Crowley’s two years in Weimar Berlin, Tobias Churton offers us a glimpse of a society in denial, gnashing at any possible distraction. Keg, thigh, drum, dance, makeup, androgyny: all the usual Weimar quirks are here, but read anew. Half-silks—weekend prostitutes—teeter down the Potsdamer Platz in heels, and transvestites belly up to the bar of the Eldorado club, as we see in a photograph from 1928, though Churton shows us, too, that club’s “transformation into a Nazi headquarters, 1933,” with swastikas clotting up the windows. Meanwhile, Hitler has begun whipping crowds into states of ecstatic fury with a few symbols and some barked incantations. What better place and moment in which to examine that creative and adventurous Briton who proclaimed himself the Great Beast?

In Churton’s view, Crowley is almost an anti-Hitler—as thinker, as willed agent-in-the-world, and, coincidentally, as painter, to which profession he dedicated much of his German time. In this last respect, the author compares Crowley with Otto Dix; as the dictator strips “men of the power to think for themselves” (Crowley’s words; he says also: “There is no room for any star in [Hitler’s] system”), Dix forces “the viewer to face reality even while so many of his characters, drawn from real life, looked the other way.” Churton shows us that gallery owners felt Crowley “had an instinctive grasp of the essences of contemporary German art,” but this isn’t just a case of a thumb on the au courant; rather, he argues, it “had long been Crowley’s own perceptual and expressive apparatus: to see things brutally, so that he might not be led astray by the pied piper of bourgeois narcolepsy.”

Churton is a partisan, to be sure, but he never conceals this. The book, after all, is framed with the explicit goal of “spiritual and artistic enlightenment,” dedicated “to Spiritual Artists of sound and vision everywhere.” Churton’s interest in Crowley’s 1931 Berlin exhibition of paintings, likewise, is personal: “The author would very much like to spearhead a major ‘Porza 2’ exhibition, reassembling as many of Crowley’s Berlin exhibition works as have survived.” So Crowley gets the hagiographic spin, but as the hero of Churton’s tour of a titillating but schizophrenic Berlin, he also gets plenty of space to speak for himself, largely in words drawn from journals and letters. If Churton’s correlation of magick with New Physics or the “national characteristics” of Germans (they “suffer from a surfeit of the rational principle”) can slow things down, Crowley’s contributions almost always add zest. Whether illuminating historical connections (cards between 666 and Aldous Huxley, for instance) or the magus’s aesthetic worldview (“the subject of a picture is merely an excuse for arranging forms and colours”), offering satirical social critique (“It’s against Nature! Howled the germinating Hydra when he/she heard about the new sexual process of reproduction”) or prophetic aphorism (“every phenomenon ought to be an orgasm of its kind”), the Great Beast delivers.

The esoteric is on offer here in two senses. Crowley’s negotiations to claim for himself the role of the Theosophical Society’s “World Teacher” represents the esoteric in the sense of occult adepts, but Churton also indulges in esoteric details of history, making the book feel, at times, padded with undigested data. On the Leipzig Thelema Publishing Company, for instance, we get, first, the shareholders and their respective number of votes and percentages of stock, then the books published with their page numbers and dates. Churton seems to miss certain key references in Crowley’s thought, as well: a discussion of the “I Am” and the “Ineffable Name” must, in the context of a self-described Kabbalistic expert, at least reference the Jewish roots of these notions, while Churton roots them to the New Testament. Likewise, the array of reproductions here imparts the flavor of the Weimar moment, but readers will likely want to see a broader range of Crowley’s own work (Kenneth Anger’s 2002 documentary of a Crowley exhibit in London, “The Man We Want to Hang,” is essential viewing on this front).

The pleasures of the book outweigh such small complaints, however. Moreover, by situating his lionized Crowley in the heart of a moment so blind to dark foreshadowings, Churton responds to ongoing debates about the politics of Crowley and his Thelema religion, albeit from an unabashedly confessional point of view. By Churton we’re shown Crowley at his most audaciously admirable, as in a tremendous (and timely) bit explaining how, as “We are God’s poems . . . begotten in his love-madness,” we do not offend Him but rather provide “Proof that the created is a live and independent Being” when we blaspheme. “Therefore, of all acts, Blasphemy is the most pleasing to God,” Crowley writes. Against such examples of Crowley, Churton reminds us of how history rolled on in the years after Crowley’s bohemian experience of Berlin:

Weimar and what happens after become, in Churton’s hands, the darkness against which to highlight Crowley with stunning chiaroscuro. The Great Beast here stands as a model of true liberation in contrast to the analgesic divertissement of Weimar nightlife, and the standard bearer of individualism rather than what Churton presents as a triumph not of “will” but of a “collective movement”—one that drove its followers, through propaganda and placation, to acts of dehumanization far more wicked than anything in the writings of a notorious occultist.