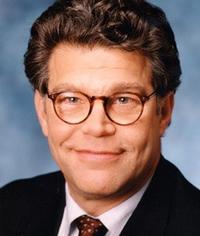 Al Franken is a powerhouse. This prolific 54-year-old satirist never seems to tire. Author of some of the most well-known political books of humor, including Rush Limbaugh Is a Big Fat Idiot, Lies and the Lying Liars Who Tell Them, and his latest, The Truth (with jokes), Franken seems to be a comedy factory that will run forever. Currently on the New York Times bestseller list, The Truth focuses more on policy issues, including the Iraq war, Social Security and gay marriage. Could this be the first sign of Franken's intentions to run for the U.S. Senate is his home state of Minnesota? He admits that he is thinking about it, but nothing is set in stone as of this writing.

Even though he strikes a more serious tone with The Truth (with jokes), Franken does not depart from the classic humor that made him such a success during his many years on the late-night comedy variety program Saturday Night Live, and that serves him well on his popular Air America radio show. Robert J. Nebel caught up with Franken in New York.

Robert J. Nebel: Do you think that your radio show and book can have an effect on the 2006 elections?

Al Franken: I don't know what will happen next year. The president and the Republican Party are in the crapper right now because of a million different things. It's things like corruption with Abramoff, Scanlon, Ralph Reed and the Iraq War. I think people know we were misled. If you mislead people you should do it effectively; they did a terrible job of it. They didn't send in enough troops to secure the country. The Iraqi Army disbanded and then a lot of looting took place. There was a lot of corrupt contracting.

RJN: You take Sean Hannity of FOX News' Hannity and Colmes to task in your book.

AF: He's one of the worst (laughs). Colmes does a good job sometimes. They have certain rules on that show that I learned since talking with Colmes; essentially they are not allowed to confront each other. Since one of those guys (Hannity) has no compunction at all about spreading the same lie over and over, and Colmes really has no way of confronting that or chooses not to, I consider that show a set-up. Colmes does the best he can, but it is a set-up. You have one guy who is a doctrinaire Republican who plays by no rules of truth and another guy who is a mild-mannered moderate who kind of plays by actual standards (laughs). You have an uneven playing field there.

I stopped calling Colmes the milquetoast host—he got a little bit angry at my characterization of him in the new book. Hannity said to me a couple of times, "What did you say about me in this book?"

RJN: Ann Coulter and many other pundits, excluding Hannity, do not make it into the new book—you are talking more about the issues. It sounds like you are getting serious about a U.S. Senate run.

AF: I'm considering it. The book, like the previous one, is about low-hanging fruit—O'Reilly, Coulter and stuff that was easy to attack. The book says that there isn't a mainstream media, but a right-wing media. Hannity made it in the new book because of his litany of smears on John Kerry that I went through and analyzed. The guy will lie and lie every day and say the same thing. Colmes said, "If I corrected him, it would get boring." And I said, "So? That would stop it."

The truth is decided by who has the most power.

RJN: Former Education Secretary Bill Bennett is another one of the targets in The Truth.

AF: The problem I have with Bill is that he has not been truthful, like the thing with Joycelyn Elders. He said that she suggested legalizing drugs. She never said such a thing. She was asked at a National Press Club event if legalizing drugs would lower crime. Elders said that it would be interesting if this idea were to be studied. Ralph Reed also used to say that Clinton had a surgeon general that advocated legalizing drugs. He flat-out lied.

RJN: Dick Cheney said that those who criticize the Iraq War efforts are undermining the efforts.

AF: It's ridiculous. They are the ones changing history. He said that there is no doubt they had reconstituted their nuclear program. By the way, they didn't. Proof is in the pudding and they are wrong about everything.

AF: Yeah, and Murtha is one of the most respected members in the House. Jean Schmidt's first comments when she joined the House were that she was going to take the high road. She made a lofty speech about that. Then she calls Jack Murtha a coward. She's an idiot.

RJN: Were you involved in the "Earth to America Special" earlier this year?

AF: I got cut: I did some anti-Bush stuff. I did a thing about global warming. A lot of other comics just did their act. I said, "What's this about?" I did a thing about Bush finally admitting that we went to war over energy—but, it wasn't for oil, it was for solar. I wrote that Iraq has 360 sunny days a year and the other five are partly sunny. He's excited about this new region called the "Sunny Triangle."

RJN: Who are the other stars in the Democratic Party you see rising?