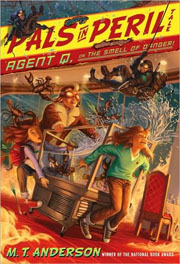 M. T. Anderson has written another Pals in Peril Tale. If you have children, or know any children, or have ever in your life seen or heard of children, use that as an excuse to find and read this book immediately.

Agent Q, or The Smell of Danger! follows the further adventures of Lilly—a wonderfully ordinary protagonist who mistakes herself for a sidekick—and her two conventionally heroic friends, Katie and Jasper. Katie is a young teen accustomed to battling vampires and werewolves, and there is series of books about her within this series of books—writers follow her around and take notes. Jasper is an all-American youth of pluck and verve who swears by the moons of Jupiter and regularly rivets together magnificent devices of retro-futurism. These inventions rarely work out as intended. In an earlier Pals in Peril Tale, the brilliantly titled Whales on Stilts!, he planted a covert surveillance device in a mad scientist's HQ; the device was powered by mule on treadmill, making it a bit less covert than it should be. Jasper also has a series of books about him, but his books all seem to be out of print. Some extant copies might be collecting dust in the sorts of restaurants that nail bits of Americana to their walls and rafters. Writers no longer follow him around to take notes.

Such metafictional cleverness is no barrier to empathy. What Terry Pratchett did for fantasy, and Douglas Adams for science fiction, M. T. Anderson accomplishes for those endless series of books, all written by the "same" author over several decades, about various children who solve mysteries. Pals in Peril is satire, and—as with the very best satire—it is also a successful example of the very thing it pokes fun at. The pals in question always know what kind of story they are in, but their postmodern self-awareness never impedes the momentum of that story. In other words, this book is laughing with you, and never at you.

Agent Q finds our heroes still forging across mythic Delaware, a land "cut off form the world for generations by its prohibitive interstate tolls." Anderson is, of course, deeply concerned about historical and geographical accuracy:

I would hate it if my portraits of people from Delaware were in any way mistaken or misleading. If you are actually from Delaware, and you feel that there are inaccuracies in my portrayal of your state, I hope that you will write a note explaining the error, hop on your ostrich, ride through the jungle to the nearest mail rocket, have the Censor from the Ministry of Silence read your letter and cross out the illegal parts, clap it into the belly of the missile, and send it winging on its way into the civilized world.

Delaware "is ruled by a tyrant known only as His Terrifying Majesty, the Awful and Adorable Autarch of Dagsboro." In Delaware any stick of furniture may be a Ministry spy in disguise, and the fate of the Resistance depends on the courage and loyalty of lobsters. It is that kind of book. Anderson explains:

Dear reader. Dear, dear reader. Here we find ourselves, you and me, engaged in a book in which someone has just exclaimed, in all seriousness, "The sentient lobsters!"
How did we end up here? Did we make some mistake along the way? Aren't there books on geology, or ancient Greek theater, or the art of Japanese flower arranging, to study?
I ask you, Isn't there something else we should be reading?
And I tell you: No.
Because you and me, we understand that important things don't always seem important. We understand that looks can be deceptive. We understand that Katie's question was in fact a very important one. Why? Because it's important to think about the fact that the Ministry of Silence might seize upon the tank of sentient lobsters who guard the safe house for the Resistance—and it's important to consider that if Katie didn't yell "THE SENTIENT LOBSTERS!" the lobsters might have found themselves abandoned and forgotten, sad eyed with drooping claws—while the restaurant burned—and their briny water heated up—and the littlest lobsters wept for help—as the flames rose. . . .
AND THAT CANNOT HAPPEN, MY FRIENDS!

Agent Q is a book that loves being a book. Every page delights in language itself. The story will make you fondly remember those series of books you devoured as a kid and know better than to ever revisit, for fear of the crushing and inevitable revelation that they were actually terrible. Read Pals in Peril books instead. Read them to children—any children you can find. They must understand the importance of sentient lobsters.