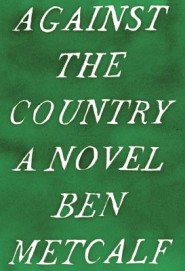 There comes a point when you’re loading turkeys for market in the middle of the night. One escapes. You see the tom out there in the darkness, walking a fencerow, loose in a new world. You want to argue for his freedom but your friend, the farmer, reminds you that a confinement-raised tom will be dead within an hour. The guys from the plant capture the tom and load him into the last of the cages. To the farmer, the escaped tom is meat by the pound—no more and no less.

Ben Metcalf’s Against the Country moves against this same hard wisdom. The narrator’s father needs to escape “town,” so he moves the family from town life in southern Illinois to Goochland County, Virginia. The familial journey here parallels the long national flight into an imagined countryside, a “pastoral fever” with real estate. The great mistake, according to Metcalf’s narrator is, “whereas we were led to believe we had acquired the land. . . in fact the land had acquired us.”

In Goochland, this narrator comes of age amid chickens and barbed wire, school bus beatings and “rural intimacy.” In requisite theological uneasiness with a kingsnake that slithers the property, this boy comes to Jesus in a trashpit. When he reflects on his own mischief, he has to remind himself, “It was a [unloaded] rifle, not a shotgun.” And he is led to a constant reckoning of his father’s attachment to the land. His father pushes his sons through the gradual dismemberment of the farm’s outbuildings, their wood stoking the family’s stove in its constant burn. The woods come down next, the boys driven by their father’s “madness brought on by the land’s constant pestering.”

Throughout the novel, the narrator digs into the continent’s “wormy ground,” and his brutal and local history spares nothing. The nearby national landmark, Monticello, is recast as “Jefferson’s labor camp.” Yet though it might seem to fall within the confines of historical fiction, the narrator reminds, “I intend no abstract on American boundaries here.” It is real barbed wire that runs through the narrator’s hands, not any placeless, figurative line in the muck between nameless sons and fathers. In distinction, Metcalf offers a rant, testing the health of the seclusion and isolation of “the American hoedown.” Set in the confines of a family “dug-in rural,” his book pokes us to look again at our “unreal and unearned Edens.” Despite its edge, it also moves from one awful, comedic moment to the next, with a chapter on a local production of Godot that includes a live chicken as a character and a six-page footnote on the “rural Bob Dylan.”

In his 1999 essay, “Mississippi Heartworm,” Metcalf begins, “I proceed from rage.” In Against the Country, it is good to see that Metcalf ‘s rage has proceeded. His prose cuts Jefferson’s map from any framing, calling out the nonreturnable, second-hand agrarian sentiments mouthed as wisdom and patriotism for what they are: a summons always willing to send others into the woods in pursuit of life and liberty and always “bound to perish, in the American fashion.”