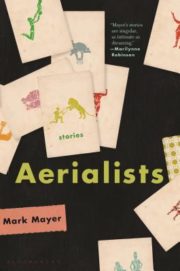 The short stories in Mark Mayer’s Aerialists are epicenters of rituals and patterns. Characters ruggedly assemble themselves in the space of his stories, appropriating whatever matter is around to fill themselves out. In “The Wilderness Act,” for example, a lonely bachelor seeks to draw a lover back to his house through a weekly ritual that seems more akin to the consecration of a religious space: “He stacked firewood on a few sheets of newspaper by the stove and vacuumed the living room carpet till it stood tall; he cooked a soup or a curry, something aromatic, as if she would find her way by smell.” The lover never returns, but he doesn’t stop performing the ritual. The act of performing it is what matters the most. The meaning behind it is secondary.

This is something Mayer struggles with: how much should the writer compel his universe to convey clear and coherent meaning? “I try to remind myself it’s never my job,” he noted in an interview with The Paris Review, “to summarize or conceptualize experiences, neither my characters’ nor my readers’. If I feel like I really understand what an event means for them, then I’m probably not living it deeply, since it’s not like I go around fully understanding what the events of my life mean.” His stories have an earthy fullness to them as if they sprout in the moment they’re read: an ecosystem of narratives that don’t fit into the spaces carved out for them on the page. Yet, there is something beautiful and heartbreaking about the strange shapes they form. Mayer, who speaks without guile about craft discussion, admits “I start with whatever I’ve got, scrap materials . . . No stage of writing comes easily to me, and nothing that worked once necessarily works twice, so I’ll start with whatever I have.”

The stories in Mayer’s collection awkwardly brush up against each other, but no matter the content, they share a contempt for ending. In “Strongwoman,” Rico, a young son of divorce who has expressed exasperation with the hidden argot of relationships, watches in dismay an indecipherable exchange between his mother and an ex-lover/friend: “I could hear my mom, at the opposite edge of the house, cackling on her own phone . . . I let go and lay back on my bed and stared between my stupid stars. ‘I told you!’ my mom was roaring. ‘Too many is too many!’ I listened hard, but I couldn’t tell what she was laughing about.” The act of “letting go” is the conclusion Mayer’s characters come to, but the one thing they are unable to do. Instead, they create spaces where the antagonists of time and change do not exist. Rituals, patterns, and fantastical spaces and languages allow some control over the uncontrollable by briefly incapsulating it and reinterpreting it; letting go is not an issue when the world is contained within a static, insular frame. In “Solidarity Forever,” for example, mathematics becomes a higher form of understanding the everyday. A young boy draws geometric patterns to imprison the circumstances of his life so he can explain them and interpret them, while his uncle sits in the basement reducing world events to mathematical formulas. At the end of the story, both characters stand by the window of a seventh-story apartment, admitting failure but refusing change. The uncle implores his nephew to have children, to continue a pattern that will promise answers they both know are not coming.

In the title story, a young man on the verge of heading to the Navy helps a blind widow piece the town together using aerial photos. With the photos, time and change momentarily halt for him, but this illusion eventually falters, and time breaks through. There is no clean acceptance of this. Many characters, like Corbin, are reluctant to proceed at the end of the story: “‘Corbin, we gotta move it,’ [Mom]’s shouting. I stood right here with the garden hose . . . I wrapped it around my arm and held on as tight as I could . . . And when I couldn’t float up—when I just stood there, beating my heart, my feet stuck to wherever there was to lose—I still squeezed rubber in my fists. ‘Please,’ Mom’s shouting, ‘let’s go.’” Heartbreak comes with the bitter realization that rituals, despite their impotence, are the only item they can keep. The narrative becomes secondary to the religious will of its characters, which continues after the story’s denouement. As a result, Mayer’s stories layer over each other like palimpsests. Hope becomes an end in-itself and characters suspect what Michael Parsons realizes near the conclusion of “The Ringmaster”: that they are “small things in a world too vast to occupy.” Because occupation implies stasis and stasis is a kind of death, they look to an imagined future just out of reach.