Join us in welcoming acclaimed poet Adrian Matejka to the Twin Cities, and prepare yourself for the kaleidoscopic wonder of his newest collection, Map to the Stars. You won’t want to miss this experience of discovery and community with one of the most talented poets writing today! Copies of Map to the Stars and other books by Adrian Matejka will be available for purchase at the event, which includes a book signing. We hope to see you there!

Adrian Matejka, German-born but now a resident of Indiana, has published four critically acclaimed collections of poetry. The Devil’s Garden (Alice James Books, 2003), a jazz-infused exploration of identity and heritage and winner of the New York / New England Award, was followed by Mixology (Penguin, 2009), selected for the National Poetry Series for its “profound and powerful cocktail of personal history, hip hop elegy, and inventive language.” His 2013 collection The Big Smoke (Penguin), an examination of the legend and history of 20th-century prizefighter Jack Johnson, was a finalist for both the Pulitzer Prize in Poetry and the National Book Award in Poetry. In March of this year, Matejka published his most recent collection, Map to the Stars (Penguin), which “navigates the tensions between race, geography, and poverty in America during the Reagan Era.” Among Matejka’s other honors are a Pushcart Prize and fellowships from the Guggenheim Foundation, the Lannan Foundation, and United States Artists. He teaches in the MFA program at Indiana University in Bloomington and is currently working on a new collection of poems, Hearing Damage, and a graphic novel. Learn more at http://www.adrianmatejka.com/.

If you are an individual with disabilities, please let us know if you require any special accommodations to enjoy this event—write us at info [at] raintaxi [dot] com.

What people are saying about Adrian Matejka:

On Map to the Stars: 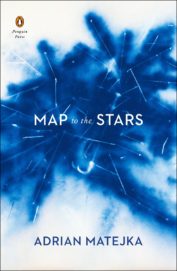 "Mr. Matejka can write. And Map to the Stars is probably Matejka’s most intimate portrayal of himself yet. The references often intone popular culture, albeit of the eighties and nineties, elongating into complicated metaphorical image-systems. Matejka has built a beautiful book that is organized in vignettes, focused on staring into the sky with Adidas firmly grounded on terra firma."
—David Tomas Martinez, Harriet Blog, The Poetry Foundation

On The Big Smoke:

"With the lean, long jab and agile step of a boxer, Adrian Matejka delivers this knockout dramatization of the larger-than-life life of heavyweight champion Jack Johnson. In dexterous interpolating voices, and in forms ranging from enveloping sonnets to prose letters and interviews, Johnson emerges as a scrappy, hard-edged hero—troubled by his own demons but determined to win the “fight of the century,” a fight that underscored the bitter realities of racism in America. These poems don’t pull no punches."
—National Book Awards Committee, 2013

"'I got me two songs instead/of eyes - all swollen and blacked/out like the day after a lost fight.' I read a line like that and know this poet is a street-talking surrealist, someone down-home and intergalactic. He weaves the likes of Fela Kuti and Wassily Kandinsky, Allen Iverson and Bob Kaufman, into poems of meditation and mischief. Here the pathos and charm of good old-fashioned storytelling is wedded to the associative freedoms of music and collage. Heady, funky, motley: this Adrian Matejka is truly a poet of the new century."
—Terrance Hayes, author of 2010 National Book Award winner Lighthead

On The Devil’s Garden:

“Adrian Matejka plays the language like a horn, with a cool inventiveness and bravura phrasing, yet his poems are as notable for their humanity as their flourishes and riffs at the borders of expression. His singular gift is to write outside the usual habits of communication and yet to deliver again and again the inside story, the testament of a life.”
—Rodney Jones, author of 1999 Pulitzer Prize nominee Elegy for the Southern Drawl